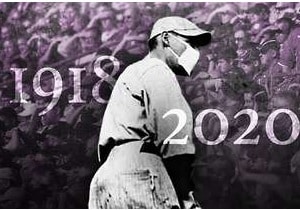 The word unprecedented is the most appropriate word to describe the COVID-19 pandemic which has seen not only the world of sport close down but also large swathes of the globe in virtual lockdown and the outbreak has caused the biggest suspension of the sporting calendar in peacetime history. Obviously public health is the number one concern with people`s lives at risk but sport, and its place in the world, has been put into perspective by the current situation.

Thankfully, as far as sport goes, instances of the widespread cancellations and postponements which have decimated everything from Parks football to the Premier League and playground kick-abouts to Six Nations Rugby have been few and far between in modern history.

The only real parallels came with two man-made conflagrations – the two World Wars, 1914-18 and 1939-45, that caused the complete cancellation of world sporting events such as the Olympic Games and the FIFA World Cup. But even with the latter global conflict there occurred the slimmest of chances that the Olympics would go ahead, in some quarters anyway.

The 1940 Olympic Games was due to be held in Tokyo and as late as 1938 the Japanese government, despite the onset of the Second Sino-Japanese War, tried to reassure the International Olympic Committee that their capital was still able to host the Olympiad.

However, the IOC switched the venue to Helsinki. BAD MOVE. In 1939 Russia invaded Finland, two months after the start of World War II, and the Olympic Games were suspended and did not resume until London, 1948.

A lot of comparisons are being made between the current COVID-19 pandemic and the outbreak of SARS in 2003, and a lot of lessons learned 17 years ago are in place today. Back then there were a number of sporting events that were cancelled due to the outbreak though not as widespread as the current decimation of the sporting calendar.

The 2003 ARAFURA Games, where disabled and able-bodied competitors compete in the same programme, planned for Darwin, was cancelled. So too were Rugby Sevens tournaments in Singapore and Beijing. The Singapore International Horse Racing Day was also called off as was the top division of the 2003 IIHF Women`s World Ice Hockey Championship, set for April 4-9.

Although that was cancelled the lower divisions went ahead with their tournaments. For a long time the threat of cancellation also hung over the Summer Olympic Games, set for Athens, but that eventually went ahead as planned. The same cannot be said of this summer`s Tokyo Olympiad.

When the current COVID-19 pandemic began it wasn’t long before the pages of history were being thumbed back to the Spanish Flu Pandemic that lasted from 1918 to 1920. Conservative estimates of the death toll then are in the region of 50 million, a colossal amount, especially when compared to the casualties of World War I, the precursor, which was 40 million.

And, surprisingly perhaps, there was at least one sporting event that was affected, the 1919 Stanley Cup, Ice-Hockey`s Blue Riband event, between Seattle Metropolitans and the Montreal Canadiens. The tournament was five games into its six-game series when Spanish Flu struck. The Montreal team was particularly badly hit with only three players remaining healthy.

British-born defence-man Joe Hall died in a Montreal Hospital. The series went uncompleted, for what is still the only time in the competition’s 127-year history and both teams had their names inscribed on the trophy. Another casualty, if that isn’t too politically incorrect a word, of the Spanish Flu pandemic was the much-hyped heavyweight boxing clash between the great Jack Dempsey and Barney Lebrowitz, in November 1918 when the first stage of the pandemic was in full flow. That fight was also cancelled.

By the very nature of the current crisis the world is having to come to terms with an unparalleled situation which is changing almost hourly. It will get back to normal, or what we perceive as normal, and so will the world of sport. How those new worlds will be, is open to debate. No one knows. We can only hope.