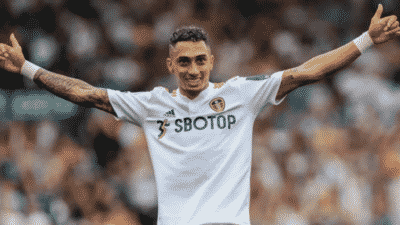 Chelsea are weighing up a £36 million move for Leeds United Brazilian forward Raphinha as they seek to bolster their squad ahead of a top four battle.

The Blues are reportedly interested in Raphinha who is also attracting interest from West Ham United and Liverpool. Chelsea’s interest, however, is said to be spurred by the desire to prevent both clubs, who are their top four rivals, from strengthening their sides ahead of the clutch part of the season.

The Blues have been following Raphinha for a while but with Timo Werner and Christian Pulisic in their ranks, a deal for the Brazilian could be hard to pull. Should they make their interest known to Leeds, they will have little to nothing to fear from Liverpool who have been linked with FC Porto’s Luis Diaz and are reported to be closing in on a deal for him.

However, they will have to act fast if they want to land Raphinha as transfer insider Gianluigi Longari has reported that West Ham have made the first move by already approaching Leeds for the Brazilian.

Leeds, however, are not looking to sell as they are in a dangerous zone of the table, just above the relegation zone. Raphinha is a prized asset and has been one of Marcelo Bielsa’s key men this season. They have turned down West Ham’s approach but face an uphill battle to keep the player, who is one of the PL’s brightest stars.

Bayern Munich are also reported to be interested in the winger and could tempt Raphinha out of England.

Reports claim that Bayern have now stepped up their interest in Andreas Christensen who they see as a replacement for Niklas Süle, who will be leaving the Allianz Arena at the end of the season.

Christensen will be a free agent in the summer but Chelsea are hoping to get him to sign a contract extension. He has not had much football under his belt this season due to COVID-19 and niggling injuries. Thomas Tuchel also found a solution in his absence and as such, the Dane is now a fringe player at the club.

Tuchel admitted that Christensen’s lack of game-time is partly the cause of the defender stalling on contract negotiations with the club.

The 25-year-old is demanding €10 million which neither Chelsea nor Bayern are prepared to offer according to Sky Germany.

Chelsea legend Gianfranco Zola has suggested to the club that they should keep Andreas Christensen moving into next season.

The 25-year-old is one of three key defensive options with expiring contracts in the summer. All of Christensen, Cesar Azpilicueta and Antonio Rudiger could be leaving the club if deals are not finalised soon.

Zola has now come out to urge the Blues to prioritise keeping Christensen due to his youth.

“We are talking about two of them being key players and have been very successful at the club. Right now, they are playing all the time — that is Rudiger and Azpilicueta,” Zola told The Sun.

“The third one (Christensen) hasn’t played as much but is the youngest.

“You don’t want to lose players when they have been so good like Azpilicueta and Rudiger.

“At the same time you don’t want to lose a good prospect like Christensen.

“Luckily, I am not Tuchel and it is very easy for me not to answer the question.

“I would maybe keep the young one and one other.”