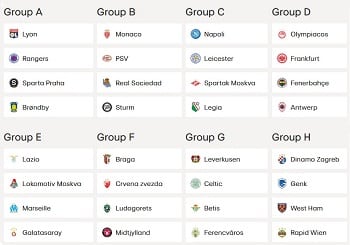 There are some quality teams in this season`s UEFA Europa League with a potential trophy winner in most of the eight groups.

Lyon are my favourites from Group A while PSV and Monaco get my vote from Group B.

I think Leicester City may surprise many people with their achievement in this competition if it doesn`t distract them from domestic fixtures.

Lazio have enough quality players as well as European experience to be last four candidates while Ferencvaros is an outside bet.

Head on the block time as I suggest West Ham could go all the way to the final.

This is a tough draw for the Scottish champions though they should be favourites to progress along with Lyon. The Ligue 1 side had a tremendous domestic campaign last time out and finished just seven points behind shock champions Lille. However, both Praha and Brondby are capable of splitting those two bigger clubs.

Monaco and PSV are favourites for this group and I think favourites to reach the final. The Riviera club only fell five points short of Lille in Ligue 1 and four behind pre-Messi PSG.

PSV were best of the rest behind runaway Eredivisie winners Ajax and it was their defence, which conceded just 35 goals in 34 matches, that edged them ahead of AZ into runners-up position.

I think not only will Leicester City be considered favourites to progress they should be considered a decent bet to reach the last four. Brendan Rogers has one of the best squads in the Premier League and he will ensure that the improvement curve the Foxes have been on over recent years will continue.

Napoli finished a disappointing 5th in Serie A last season despite having some of the best players in Italy and Europe. Insigne is world class forward and Dries Mertens is one of the best players in the best team in the world, Belgium. At the back Napoli has one of the top goalkeepers in the world David Ospina so I expect Leicester and Napoli to go through and at least reach the last eight.

Olympiacos won the Greek Super League last season by 16 points so should be well capable of exiting this group where there is little too choose between the four sides. Eintracht Frankfurt only lost six league games last campaign but too many draws cost them a CL place and they slipped behind Wolfsburg to finish fifth.

Antwerp could be the other team, along with Olympiacos to progress. Although they finished runners-up in the Belgian First Division it was a massive 16 points behind champions Club Brugge and Fenerbache will be Antwerp`s biggest threat. They only lost out on the Turkish Super Lig title by two points, finishing third behind Galatasaray, by two points, and Besiktas who won the title with 84 points, on goal difference.

Lazio must be considered favourites to top this group with Immobile and Pedro in their ranks and their vast amount of European experience at the highest level. Marseilles are not the force they once were and may be hard pushed to ease aside Galatasaray who will still be seething at missing out on their domestic league on goal-difference to Besiktas.

Lokomotive can upset any of the other three but I think the group toppers will be Lazio and Galatasaray.

One could almost select the two teams to progress with a blindfold and a pin. BUT, sneaking into contention is Crvena Zvesda, better known as Red Star Belgrade, only the second team from Eastern Europe to win the European Cup, which they did in 1991.

I expect the Serbian club to win the group with either Ludogorets or Midtjyalland second.

Another tough draw for a British club. Celtic find the transition from domestic football to European competition difficult because not only is there poorer competition for them in the SPL, the gap is closing and they no longer enjoy their previous pre-eminence at home now that Rangers have taken that crown.

Bayer Leverkusen scrapped into sixth place in last season`s Bundesliga although they will be pleased that despite losing 10 league games that was a total matching that of Borussia Dortmund.

Ferencvaros maintained their customary status as the best Hungarian club and lost just one game as they stormed to the title a full 20 points ahead of runners-up Puskas Akademia. Winning is a habit and I think although Celtic can, on their day, produce the goods, I see Leverkusen and Ferencvaros as first and second.

Genk finished fourth in last season`s Belgian top flight, just behind legendary Anderlecht – who they beat recently. Organised though they are there isn`t much to choose between their attacking and defending, both of which is average. Dinamo Zagreb have a good European pedigree and were runaway winners of the Croatian HNL league last season though Osijek pushed them all the way but ended up seven points behind in the final table.

I think Zagreb will top the group but I also have a sneaking feeling for West Ham United. David Moyes has worked wonders with the Hammers and there may just be enough nous in their squad, not to mention some top players, that they could well do a Fulham and reach the final.

Rapid Wien are another team in this competition with heritage. They were runners-up to RB Salzburg last season, though by some distance -15 points, but their last European highlight was in 1996 when, for the second time, they were runners-up in the ECWC. They were also losers in the 1985 final to Everton. 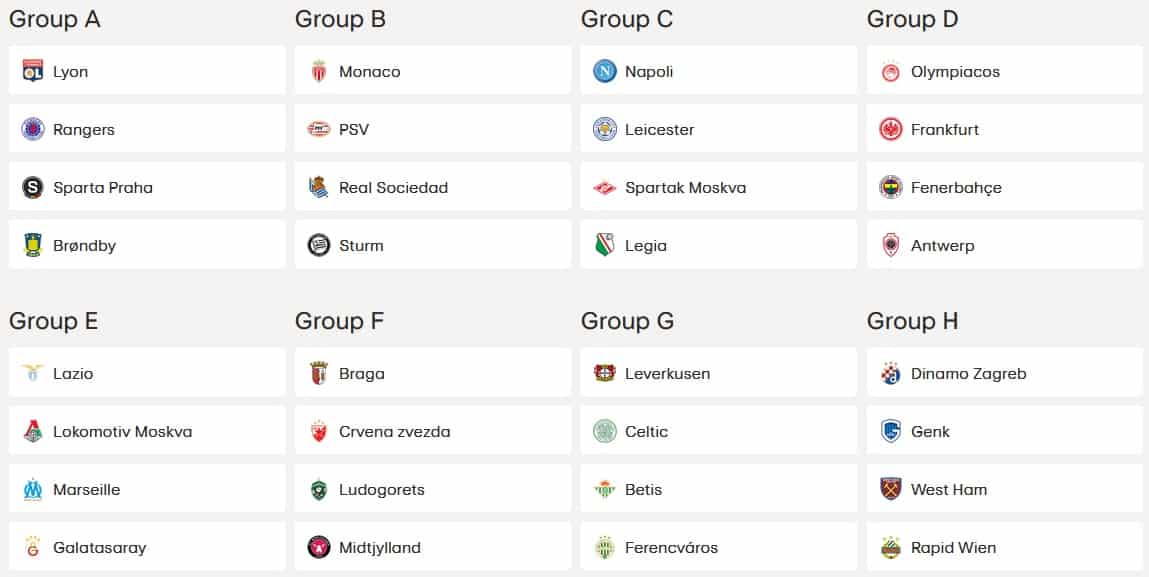