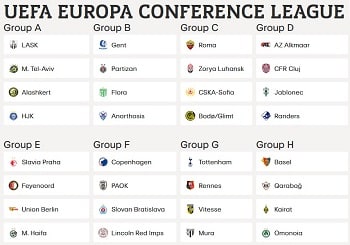 After the dearth of European football caused by Covid-19 we have the overkill of yet another UEFA brainwave, the Europa Conference. A new competition starting for 2021-22 comprises in the first stage with eight groups of four teams. The group winners will qualify followed by play-off runners up and 3rd placed teams.

Therefore, it does not matter what hobby you started doing during quarantine. Whether it’s some sport, playing online casinos with Starburst bonus spins or regular dog walks. Real European football fans will immediately be interested in this new tournament.

On the plus side the winners get the carrot of qualifying for the following season`s Europa League, if not already qualified for the UCL via their domestic league. The downside is the number of teams in the Europa League will reduce from 48 to 32, eight groups of four.

Initial perspective may consider the new competition a consolation but a scan of the teams who will be involved throw up some European heavyweights as well as teams that will have folk saying `who`, or `how do you spell that` or where are they from.

If we cast our minds back to the 1950s and the launch of the European Cup and the Fairs` Cup, pretty elitist affairs, UEFA have at least cast their fiscal net further afield and given lesser teams the chance to experience European football.

There are some really good sides in this new tournament including previous winners of European silverware such as Tottenham and West Ham from the Premier League. Roma were UEFA Cup runners-up in 1991 and Bayer Leverkusen were winners in 1998. Ferencvaros were semi-finalists way back in 1972 while Celtic`s European Cup triumph was five years earlier and fellow SPL rivals Rangers won the ECWC in 1972.

Monaco were runners-up in the 1992 ECWC while Marseilles, in 1993, became the first, and so far, only French team to lift the UCL.

Roma have been losing finalists in both the UCL and the UEFA Cup while Napoli lifted the UEFA Cup in 1989 and PSV won the UCL in 1988, ten years after winning the UEFA Cup.

HJK Helsinki is considered the biggest club in Finland and are the only side from that nation to compete in the UCL Group stage which they did in 1998 by beating Metz in a play-off. That is the club`s best Euro showing but they do have much experience on the European stage so along with Tel Aviv should be considered favourites to progress.

The Israeli side are probably the most well-known team from that nation on the European stage and are usually pre-eminent in their domestic league though they haven`t made a good start to the current campaign, perhaps to be expected after qualifying for the new UEFA competition. Maccabi are one of only three Israeli teams to progress to the UCL group stage.

HJK and Maccabi to top the group.

Partizan Belgrade is one of the best known names in European football and as a club, having spent their entire existence in the top flight of Yugoslavian and Serbian football, they have been perennial qualifiers for European football. Their best performance was finishing runners-up in the 1965-66 European Cup. I expect Partizan to progress along with Gent.

The Belgian club have been top-flight members of the Belgian League for more than 30 years and last season they finished seventh though a few less defeats than the 13 they suffered would have earned them greater reward in terms of European football.

Roma are not only the stand out team in this group but for me are stand out favourites to win the trophy. They have a phenomenal record in European football, reaching two European Cup finals and amassing a total of nearly 300 UEFA club competition games. Throw in their `Special` manager, Jose Mourinho and a star-studded squad; Henrik Mkhitaryan, Edin Dzeko, Rui Patricio and Pedro, oh, yes, and the newly arrived and much underrated Tammy Abraham and one can appreciate how strong a favourite they are to win the Europa Conference.

CSKA Sofia have always been known as the `army team` outside their native Bulgaria and outside their own borders they have a pretty good record on the European stage as the only Bulgarian side to reach the semi-finals of the European Cup, which they did twice, in 1967 and 1982. They have also reached the last four in the ECWC, in 1989 so Roma and CSKA are my two to top this group.

Randers is one of the unfamiliar names competing in the new UEFA competition which isn`t surprising considering they were only founded in 2003 but they have already won the Danish Cup twice. They would be a good bet to follow AZ Alkmar out of this group.

AZ  have a good European pedigree as well as twice winning the Eredivisie, the most recent being 2009. Bruno Martins Indi, the very experienced Dutch international defender, and former Feyenoord star, is probably their best known player. I think they should top the group and are a good shout to reach the last four.

This could be a very close group but my two favourites to progress are Slavia Praha and Feyenoord.

The Dutch club is one of the best known clubs in Europe with a European achievement record to match, on top of a continuous place in the Dutch top flight since 1921, a better record than even Ajax or PSV.

Feyenoord`s UEFA Cup win in 2002 means they are still the only Dutch club to win a European trophy. They must be strong favourites to add a second in 2022.

Slavia`s European experience puts them up with Feyenoord as the expected qualifiers from Group E. Praha have reached the quarter-finals of the Europa League, 2018-19, and they also qualified for the 2019-20 UCL Group stage, for only the second time in their history.  They have been flying for the past year and half and again reached the Europa League quarter-finals, in 2020-21 as well as going through the entire Czech domestic campaign undefeated. They set a new national record with an unbeaten run of 46 games, between 2020 and 2021.

FC Copenhagen in 2019 were the highest ranked Scandinavian club in the UEFA team rankings, not bad for a club founded as recently as 1992 and they are currently 35th in the UEFA rankings. They are the only Danish team to reach to reach the knock-out stages of the UCL and are the most successful club from that nation in European competition reaching the knock out stages of the UCL four times. Bryan Oviedo, who had spells in the Premier League with Everton, is perhaps their most famous player with 60 caps for Costa Rica. They should be considered favourites to progress from this group.

Slovan Bratislava should vie with Copenhagen for top spot in this group. They are perhaps the best known club from the Czech Republic and the most successful on the European stage having become the first club from their nation to win a European trophy, beating Barcelona in the 1969 ECWC Final. Seven years later Slovan supplied seven of the Czechoslovak team that won the 1976 European Championships.

PAOK are likely to be the third placed team though they have enough quality players to threaten second place, including former Manchester United player, Japanese international Shinji  Kagawa. The record Japanese scorer in European club competition Kagawa also played 150 games for Borussia Dortmund. He may be 32 but will still be a threat, especially in front of goal.

Lincoln Red Imps, from Malta, will struggle against three teams much better than they.

As Spurs sat atop the Premier League in late August they will be, secretly, thinking this is a competition they can win. I agree. Nuno Espirito Santo is a different sort of manager and coach than the club has ever had and I think his approach, not to mention having a certain striker – probably- to select plus Son should make them one of the two favourites for the trophy. I think they will easily progress.

Rennes are my other choice to progress. They won the third of their French Coupe de France trophies as recently as 2019. The club also won the UEFA Intertoto Cup in 2008 –joint. Their best domestic finish was in the curtailed 2019-20 season when they were third.

Basel is not only one of my favourite clubs, a side that plays enjoyable, expansive football, but also one of my favourites for this new UEFA competition. Eight times, consecutively, they won the Swiss domestic title, that run ended in 2017 and in Europe they reached the UCL quarter-finals in 1974, more recently the last 16 in 2018. They also reached the quarter finals of the Europa League just last year. Arthur Cabral is arguably their most famous player but they have a hidden gem in former Liverpool youngster Liam Miller. Not quite 22 Miller, a Canadian winger, is a player who has showed much promise since his loan spell professional debut in the SPL with Kilmarnock. Definitely one to watch.

Qarabag, based in Baku but from Azerbaijan originally, have not played on their home pitch since 1993 due to an ongoing war. They are the first Azerbaijani club to reach the group stage of the UCL, which they did in 2017-18 and they have played more UEFA matches than any other club from their country. I think they will progress along with Basel. 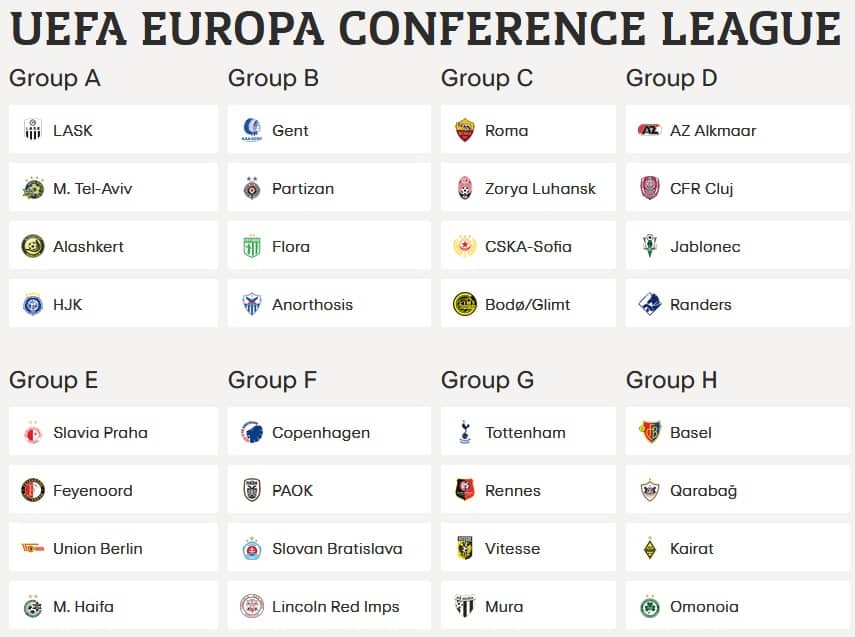