The largest World Cup qualifying draw ever was completed on December 7 with 55 teams being placed in ten groups. The ten group winners will qualify for Qatar in 2022 plus the two best group winners of the 2021-22 UEFA Nations League. So the forthcoming UEFA World Cup Qualifying tournament is getting closer and closer to a REAL World Cup as the qualifiers for Qatar represent more than 25% of the FIFA ranked nations.

Portugal are obviously the stand out team in this group and if they don’t qualify it would rank alongside USA beating England in 1950 as a seismic shock. I suppose the biggest question is, will Ronaldo still be part of their package, he will be pushing 38 by the time the winter World Cup comes around, or will he sign off by steering Portugal towards Qatar.

I think the former. The race for second place should be between Ireland and Serbia but the Irish really need to sort their woeful lack of goals out if they are to stand any kind of chance. Maybe they should do a Jack Charlton, may he rest in peace, and dig back through the archives for any player who ever visited the Republic or sank a pint of Guinness to see if they are eligible. Or maybe persuade Robbie Keane to come out of retirement. Serbia have no such problems with Dusan Tadic and Alexsander Mitrovic among Europe`s best.

FIFA have announced that Qatar will play in Group A as guests in preparation for hosting the 2022 World Cup Finals. Their results in the ten matches will not have any effect on the Group outcome and will be regarded simply as friendly games. Qatar’s five “home” games will be played at European venues to minimise travel time for their opponents.

Not many people will look beyond serial trophy winners Spain, to top the group, and Sweden to claim second place but I think Kosovo will have a huge say in who qualifies. Amazingly they have only been a FIFA recognised member for four years and yet they have climbed towards the top of the bottom half of the rankings, currently 117th, in that short spell, even getting as high as 114th.

And their stats are impressive too; of their 38 matches to date they have won 15, drawn 8 and lost 15. They also finished third in their UEFA Euro qualifying group for Euro 2020 and were promoted from Division 3 as top team. The games between Kosovo and Georgia will probably settle third place although either team is more than capable of upsetting Sweden according to PowerPlay.

Italy will be hot favourites to win the group and, as befits a team in the Top 10 of the world rankings, they were 10th at the time the draw, a climb of two places will see them as one of the favourites. Improvement always seems to be the name of the game for Italy as it’s been 13 years since they were ranked first in the world.

Switzerland has been one of the surprise teams in recent years and made a massive impression finishing fourth in the 2019 UEFA League Finals. Those two should be first and second to qualify leaving, potentially, Northern Ireland and Bulgaria fighting out third place.

France`s greatest opposition in this group will be…France. They will be such hot favourites that the unquenchable Gallic self-assurance may cause implosion and they could falter. Any signs of weakness and they will be exploited by Ukraine, currently 24th in the FIFA rankings or the ever-improving though enigmatic Finns.

World number 1 ranked Belgium could probably field two quality teams and both would qualify from this group but the key games will most likely be between Wales and the Czech Republic. Gareth Bale and co are ranked in the top 20, 18th at the time of the draw, but that represents a drop of ten places in just five years since they were eighth in 2015.

The Czech Republic are always quality opposition, especially in tournament finals but although they have a fine record in participating in every European Championships since 1996 they have reached only one World Cup finals, 2006.

I think Scotland, quietly, will be fancying their chances of qualifying from this group. Although a realistic target should be second place behind Denmark you never know what you are going to get from the enigmatic Danes. They can be on-fire, as they showed in recent internationals when they put two past Belgium only to lose 4-2 but they beat Iceland and Sweden after losing to late goal against England.

The Danes also won 3-0 in Iceland. Denmark’s current ranking of 12th, though should not be discounted. Austria are capable of raising their game, every so often and Israel could rattle a few cages but in the end I think the Scots and the Danes will be the ones celebrating.

I think this is going to be the most explosive, entertaining and watchable group of the lot. At the top of the group I expect the re-born Netherlands to make a big impression once they reach Qatar. But I am most looking forward to one player, the giant of a man-boy, Erling Braut Haaland, the hottest young prospect in world football.

Is he really only 21? Nearly six foot five inches tall he has the balance, poise and guile of the full spectrum any goal scorer would be proud of. He is strong, powerful, fast and on top of all that, and much more, he has the predatory instincts of a born striker – stats do not lie, especially where strikers are concerned.

Can you imagine how Gibraltar will cope when faced with a centre forward almost as tall as the Rock itself? But a word of warning here. While most eyes will be on the Dutch and the Norwegians do not discount Turkey. Since 2000 they have won Bronze in the World Cup, 2002, after reaching the semi-finals, the Confederations Cup, 2003, and the 2008 European Championship, when they reached the semi-finals. They may only be ranked 32 in the world but they always seem to do well in tournaments.

You have to look way down the list of players Croatia has at its disposal before you get anywhere near the semblance of a non-top quality player. They are serial good performers at international football tournaments and have an almost endless supply of new talent coming through on their production line. Since their admission to FIFA in 1991 they have climbed to 16th in the rankings although they were 5th after their exploits in the 2018 Russia World Cup, where they finished runners-up.

Slovenia have made great strides since the break up of Yugoslavia and 1992 the year of their first official international and are currently 15th in the FIFA rankings. And in skipper Jan Oblak they have, arguably, the best goalkeeper in world football. Incredibly the Atletico Madrid custodian is still only 27.

Russia and Slovakia may push Slovenia for second in the group but I think both Croatia and Slovenia will progress, but in what order, I wouldn’t bet.

Wouldn’t you just know it. The oldest international football association in the world with so much history, England, is grouped with several nations with which they have very clear memories and not all of them happy ones. However, I believe Gareth Southgate will have permitted himself a few inner smiles of satisfaction.

Not only will he be able to see an almost unhindered path to Qatar, but he will foresee a qualification programme that will allow him to experiment with the plethora of young talent he can call upon over the next two years. Poland will be spearheaded by the under rated, yes, I am using that word because, despite his unparalleled scoring record for club and country, Robert Lewandowski seems to struggle for the recognition he has earned.

I also think that the main focus of the England coach, especially when it comes to planning for the two games against Poland, will be finding a couple of central defenders, defenders who can play, but also defend, and there aren`t too many of them at present.

I’ve just had a vision flash across my mind of Lewandowski against San Marino and Andorra, wow!

I`m going to go out on a limb here and predict that by the time the qualification route has been completed Joachim Low will not be the German coach and will have been replaced by the Scouse German, Jurgen Klopp. Although Germany climbed a place to 13th in the FIFA rankings by the time the draw was made they have not, as a national team, made the kind of progress enjoyed by their premier club side Bayern Munich.

They should, however, have too much for the other teams in this group and give thanks for the most generous of draws that gave Germany such a clear path to Qatar.

Romania should finish second and have in their ranks Ianis Hagi, son of the nation`s greatest ever footballer, Gheorghe. A highly talented midfielder with an eye for goal Qatar may just prove a stage on which the young man can flourish.

Iceland may have a say in who occupies second place but I doubt it.

With the first qualifiers not due until Matchday 1, March 2021, a lot of form and fitness will fluctuate before international managers and coaches select their squads and teams for the road to Qatar. 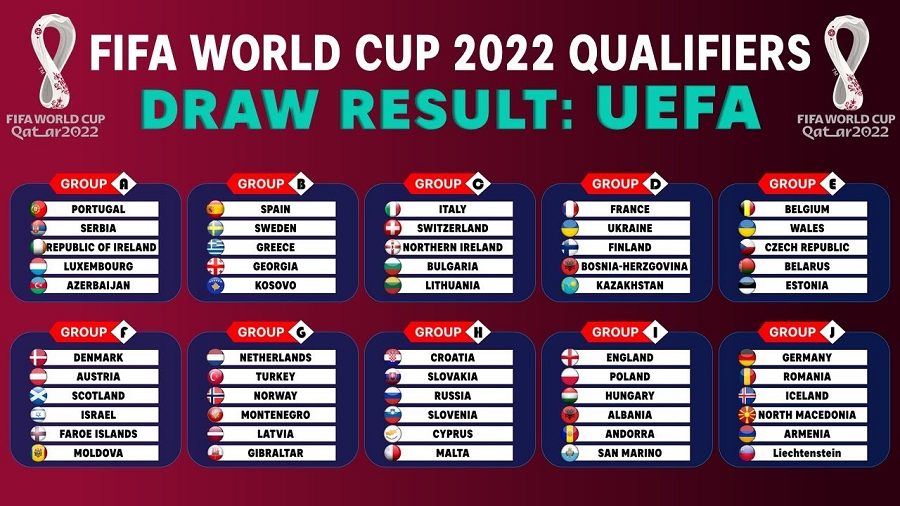