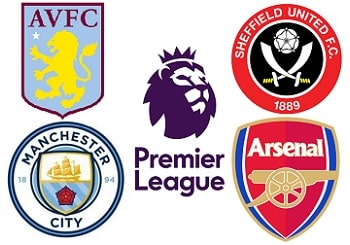 Article: What to Expect when the Premier League Restarts

The 2019-20 Premier League season is set to restart on Wednesday 17 June 2020 with Manchester City versus Arsenal and Aston Villa hosting Sheffield United.

Then from Friday 19 June there will be the start of the remaining nine rounds with all games kicking off at different times so they can be televised. Despite games being played behind closed doors it makes for an exciting end to the season.

Liverpool had the Premier League title all but wrapped up when football in England was suspended on 13 March but the Reds could confirm that crown as early as the first weekend back when they race rivals Everton in the second Merseyside derby of the season.

For that to happen, Arsenal would need to beat Manchester City first. It’s not out of the question though. Neither side will have been able to get much training in beforehand and no friendlies either. During his limited time in charge of the Gunners, Mikel Arteta showed good organisation and they were unbeaten in the Premier League in 2020.

The second game on opening night is important at both ends of the table. Aston Villa are currently sitting in the relegation zone and a victory would move them out before the weekend. Sheffield United are in the European places and a long shot to qualify for next season’s Champions League.

On the subject of Champions League football, the current top four are all odds on with the bookmakers to maintain their places when the season ends. Leicester City are as short as 1/7 and Chelsea are even 8/15.

If you fancy Ole Gunnar Solskjaer to drag his side into the top four, you can currently get odds as high as 7/4. One of the bookmakers offering this top price is sportingbet. If you don’t have an account with them you may want to consider reading this sportingbet review before joining.

The Blues only have a three-point lead over Manchester United, who beat Manchester City 2-0 before the league’s suspension and were looking impressive following the arrival of Bruno Fernandes at the end of January.

Leicester had been eight points ahead of Manchester United prior to the disruption and badly out of form, so this may play into their hands.

At the other end of the Premier League table, it had been looking all doom and gloom for Norwich City, six points adrift, but who knows what will happen in the final nine games now. Directly above them are Aston Villa and Bournemouth, with the latter only below West Ham United and Watford on goal difference. Brighton & Hove Albion are very much in the equation too.

Sports betting tipster Mikelevich Vadim expects it to be an exciting end to the season and that odds of 5/2 on Watford to be relegated a great price given the issues they’ve had with Adrian Mariappa and Troy Deeney, as well as other unnamed staff catching the coronavirus.

Brighton are 3/1 to be relegated and Steve Bruce’s Newcastle United 20/1.