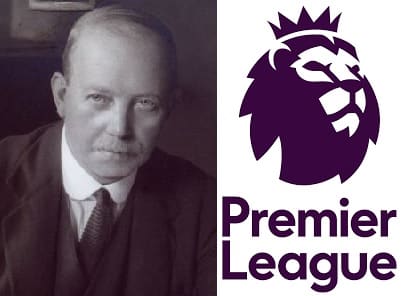 Which 20 of the 49 Premier League Clubs had stands designed by Architect Archibald Leitch?

In March 1899 Archie received the call from The Rangers where he was commissioned to build Ibrox Park, the new home ground.  Disaster struck Ibrox stadium in 1902, when 25 people were killed when a bank of wooden terracing collapsed due to substandard pine being used in the terraces.  Leitch was in attendance at the disaster and convinced Rangers to hire him to rebuild the stand. Leitch patented a new form of strengthening terraces for the Ibrox rebuild. Over the next four decades he became Britain’s foremost football architect. In total he was commissioned to design part or all of more than 20 stadiums in the UK and Ireland between 1899 and 1939.

The 20 of the 49 Premier League Clubs who had stands designed by Architect Archibald Leitch  are: