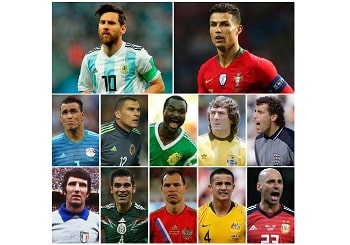 Article: Will Lionel Messi & Cristiano Ronaldo be Too Old for 2022 World Cup?

`Class is permanent, form is temporary`, is one of those football clichés that is spot on. It is a saying that can not only be applied to Lionel Messi and Cristiano Ronaldo but in the same way those two transcend any concept of the best player ever they can also rewrite that particular cliché and make it their own, `you never lose it`.

For the best part of a decade and a half these two players have vied for the `title of the greatest player ever`, an accolade that was, for so long, the sole property of Pele. Some may venture to suggest that you only need to look at the list of Balon d` Or winners to decide, some may quote goals per game ratio or even minutes per goal, and even assists but, whatever the criteria, choosing between them is so subjective.

Messi, for the record, has six Balon d`Or trophies while Cristiano is one behind, at present. On the other hand Ronaldo has finished runner-up six times while Lionel has been second five times.

Stats can be used to lean the choice one way or the other for two players, unique in the extreme but there are remarkable similarities that have nothing to do with `stats`.

Both are dynamic, literally, although Ronaldo is more athletic, while Messi has quicker feet. Ronaldo may be better in the air but Messi proably assists more in making goals for others. BUT, neither has won the World Cup, the crowning glory for a wannabe `Best Ever`. Pele has three World Cup winners` medals, Cristiano has won the European Championship but Messi`s only international silverware is South American.

So, will the two best footballers of their generation, and before, be able to strut their stuff in the 2022 Qatar World Cup, pre-supposing the tournament takes place as scheduled.

Both are supremely fit and despite their ages come the winter of 2022, Messi will be 35, Ronaldo, 37, nearly 38, I doubt either will have a fitness issue. Injury, on the other hand, could produce an entirely different ball game.

Both players have, but are not reliant on, dynamic, bursts of speed and both are supreme examples of the old adage `the first two yards are in the head`.

I think the biggest factor will be hunger. Presuming both Argentina and Portugal qualify for Qatar how motivated will Messi and Ronaldo be.

I think, if it is possible to quantity such an unquantifiable factor as appetite, or hunger, Messi has a slight edge in that department because sometimes Ronaldo can give the impression that he sometimes `just doesn`t fancy it`.

If a one word answer to the question, `Will Lionel Messi and Cristiano Ronaldo be able to strut their stuff in Qatar` is required then it is a resounding,

Essam El Hadary at 45 years and 161 days the Egyptian goalkeeping legend is the oldest player to appear in a FIFA World Cup finals tournament after playing in the 2018 Russia World Cup. He played in Egypt`s final group game, in June 2018 against Saudi Arabia, and thus became the oldest player in a World Cup and the oldest to debut in a tournament and managed to save a first half penalty as well. He announced his retirement, with 159 international caps, two months later

El Hadary took the record from its previous holder, Faryd Mondragon, of Colombia, who was 43 years and 3 days old when he played against Japan in the 2014 World Cup. After Colombia were eliminated by Brazil Mondragon announced his retirement after a career total of 701 games and one goal, scored for Independiente, Argentina. Mondragon is the only Colombian to have played in five World Cup qualifying series.

Roger Milla was 42 years and 38 days old when he starred for Cameroon in the 1994 World Cup although doubts over the authenticity of his age exist to this day. It was at that tournament that Milla became the oldest World Cup finals goal-scorer when he netted against Russia. He scored an impressive total of 43 goals in his 77 international appearances as well as an astonishing 405 goals in a 666 game club career.

Pat Jennings kept goal for Northern Ireland in the 1986 World Cup finals in Mexico aged 41. He played for his country for a record, still standing, 22 years after making his international debut in the same game as George Best debuted, against Wales on April 15th 1964. His club record was one year longer and although Everton was his last club, he signed as cover for Neville Southall, he never played a single game and so finished with a career club appearance total of 757.

Peter Shilton is the fifth oldest World Cup finals player. He played in the 1990 finals aged 40 years nine months and 19 days and helped England to the semi-finals in Italy where they lost to West Germany. England finished fourth when they lost the play-off for Bronze to hosts Italy. He announced his retirement shortly after his 126th and final cap, but to this day he holds the all-time world record for competitive career appearances of 1,390.

Sixth in the ranking of oldest World Cup finals players is the only one on the list of top ten oldest players to actually win the World Cup, Dino Zoff. He is also the oldest World Cup winner, aged 40 years, four months and 13 days. Not only was he the first goalkeeper captain to lift a World Cup he was also voted player of that 1982 tournament in Spain.

Rafael Marquez, Mexico, was 39 when he became only the fourth player, ever, to play in five World Cup finals, when he was part of the 2018 squad for the Russia World Cup. He was also the first player, ever, to play in five World Cups as a captain. His club career wasn`t too shabby either as he not only became the first Mexican to play for Barcelona he also won the UCL with them, in 2006.

Russia international Segei Ignashevich, fittingly in the 2018 World Cup, joined the list of oldest finals players when he starred on home soil at the age of 38. He impressed at Russia swept as far as the quarter-finals where they lost a penalty shoot-out to eventual finalists Croatia. Sergei announced his retirement shortly afterwards and in his first coaching job he took Moscow Torpedo to promotion to the Football National League the following year.

Tim Cahill also got onto this particular Roll of Honour when he led Australia in the 2018 World Cup, aged 38. Tim was the epitomy of a goal-scoring midfield player and was, fittingly, the first Australian to score a World Cup finals goal when he netted in the opening game of the 2006 finals. He went on to became Australia`s All-time record goals scorer with 50 goals in 108 appearances as well as the leading World Cup finals goals scorer for his country with five, in an international career spanning 2004 to 2018.

The 2018 World Cup in Russia was a fruitful event for ageing footballers because Willy Caballero became the fifth player on the top-ten list when he played for Argentina, aged 36 in the 1-1 draw with Iceland. His next game, his fifth and final cap, was against Croatia but a costly mistake saw him dropped for the next game.