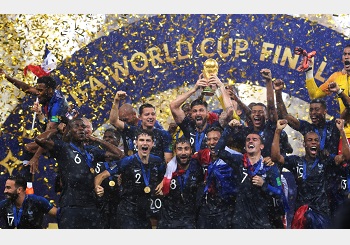 As always, the greatest football event on the globe provided us with some good matches to watch and ambitious teams to root for. FIFA World Cup in Russia was unique for various reasons. There were quite a few unusual results, plus the revolutionary Video Assistant Referee system which un-doubtedly eliminated a good part of unwanted controversies. Those of us who enjoy to make money wagers on sports from time to time certainly found plenty of action to choose from.

The World Cup finals are now a beautiful history, full of sporting emotions and betting possibilities. Dedicated bettors will surely find more absorbing opportunities to move their money around. For poker players, there are always new and exciting tournaments. Then there are the early stages of European football competitions and – soon enough – the start of the next season in the top leagues. Looking back at the championships in Russia however, one can easily notice how interesting it was from this perspective. Perhaps a small fortune was made here and there by backing the right candidate, and quite a few disappointments must have been unavoidable.

Gamblers tend to look at their sports of choice in a different way than regular fans do. They have to think a little bit like experts in the field and analyse the things like how many corner kicks could occur in the match when the team is known for their good performance during set pieces, or what factors will influence the number of bookings in a particular game (tension between teams, the stakes, play-ers’ overall aggression). Suchlike parts of the sport might not be particularly important to regular viewers who mostly care if they favourite can win or simply want to watch some good football quality but are very interesting to people who invested their money.

Matches and tournaments, especially of the highest prestige, are often taken apart to smaller ele-ments that could be put together in a fashionable manner showing an interesting pattern. The recent tournament was also rich in statistics. For example, we learned that 10 Belgian players equalled the record for most marksmen, Ivan Perisic ran the longest distance (72.5 km) and Kasper Schmeichel saved 91.3 per cent of the shots (compared to David De Gea’s 14.3 per cent). Among the most useful information bettors would have loved to know beforehand, especially in the early cup stages, are: Harry Kane scoring six goals and snatching the Golden Boot award, Mario Mandzukic scoring a goal and own goal in the final (which made the total number of 12 own goals in the tournament), Kane’s and Cristiano Ronaldo’s hattricks, 22 out of 29 penalty kicks converted to goals, and so on.

The biggest surprises, however, have to be some of the results achieved by favourites and under-dogs. Argentina, Spain, Brazil are always considered to be title pretenders but the medals went somewhere else this time. The truly shocking was the elimination of former champions – the Ger-mans. They didn’t even get through to the knockout round. On other note, fans in England could finally witness the national team living up to the potential and expectations. Belgium managed to capitalize on its golden generation taking home bronze medal and Croatian footballers showed the great determination and strength that took them all the way to the big final.