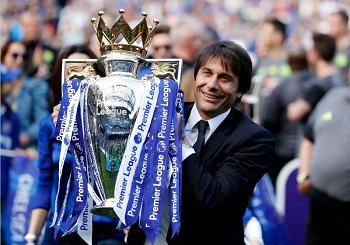 Which Team’s Attacking Stats Suggest They are Best-Placed for a Title Challenge Next Season?

The 2017-18 Premier League season is right around the corner, and it’s time to start getting hyped up about the excitement to follow. Plenty of teams have already conducted serious transfer business, and Everton have made their presence felt with an £80 million foray into the transfer market by mid-July and further additions set to follow. After Antonio Conte’s Chelsea stormed to the title last season and won by an impressive seven points, bookies and pundits alike are predicting a much closer race this season now that Jose Mourinho and Pep Guardiola have settled into their respective clubs. In fact, there’s not much to split the two Manchester sides and the reigning champions, with odds of lifting the title at 15/8 (Manchester City), 10/3 (Manchester United), and 15/4 (Chelsea) prior to the pre-season tours – while Spurs sit back as fourth-favourites. In an effort to assess which team may have the upper hand in the fierce battle ahead to dethrone Chelsea, we take a look at some of the attacking stats from last season.

Mauricio Pochettino’s side features Harry Kane, who has scored 29, 25, and 21 goals in the last three seasons. His Golden Boot-winning display last time out was all the more impressive because it was done in the least amount of games at 29. He also averaged 3.7 shots per game, which is his highest output in the top flight to date. The 23-year-old is improving by the year and also had the best service in the league in the last campaign. The Lilywhites created a chance every 5.4 minutes, which is a superior rate to Liverpool (5.6), City (5.7), United (6.1), and Chelsea (6.2). Despite this, Spurs are intriguingly priced at 10/1 with betting odds to win the division this term, despite having fought valiantly in the past two campaigns to register third and second-place finishes. The one thing that may be discouraging pundits from backing the North London outfit is the fact that they are moving from White Hart Lane to Wembley. During their Champions League fixtures at the national ground last term, Pochettino’s side badly underperformed. They have won one of their last eight matches at the stadium.

City were the third-highest scorers in the league last term, notching 80 goals. Chelsea fired in 85 and Spurs topped the charts with 86. Guardiola will be desperate for improvement on this and appears to be setting up his side for an all-out attack system which could end up rivalling the Citizen’s title-winning campaign of 2013-14, in which they tallied a whopping 102 goals. As Alexis Sanchez has been strongly linked with a move to the Etihad Stadium, it remains to be seen what the former Barcelona boss’s favoured line-up will be. But even prior to the potential signature of the Chilean hitman, who scored 24 goals and provided 10 assists for Arsenal last season, the Catalan has an embarrassment of riches to lead the line. Sergio Aguero is the proven goalscorer, and fired more attempts (139) than any other player in the division last term. He is also one of the most consistent players with 20, 24, 26, and 17 goals in his past four campaigns. However, Guardiola may favour the young Brazilian striker Gabriel Jesus at the tip of the trident. The 20-year-old scored a goal every 92.9 minutes last season, which was superior to Aguero (120.2), Romelu Lukaku (130.7) and Zlatan Ibrahimović (143.4), and only bettered by Kane (87.3) and Michy Batshuayi (47.8)

United only managed to bag 54 goals last season, which was fewer than Everton (62) and Bournemouth (55), who finished below the Red Devils in the league. Mourinho is hoping to rectify this and has recently snapped up last term’s second-highest scorer of 25 goals, Romelu Lukaku. The formidable Belgian cost United more than £75 million, but at 24 years of age and with a proven track record in the top flight of 25 and 18 goals in his past two seasons playing for a club that managed seventh and eleventh-place finishes, he should flourish at Old Trafford. Mourinho has a history of winning leagues during his second season at a club, and now he has had a chance to bring in more of his own players and settle in, massive improvements are expected. Lukaku and Marcus Rashford, who has scored five goals in each of the past two seasons, could form an explosive partnership, and it will be intriguing to see how the Portuguese lines up his squad in the pre-season fixtures, which include a Manchester derby at the NRG Stadium in Houston.

This analysis, of course, has barely scratched the surface, and winning the league is most certainly not just about who has the most firepower. United were exceptional defensively last season and Chelsea dominated the centre of the park thanks to their player of the year, N’Golo Kante. There are also other contenders for the title, including Liverpool and Arsenal, who both have made significant moves in the transfer market. The stats can only guide us, and it’s the unpredictability of the league that ultimately makes it so exciting to watch.
ADVERTISEMENT