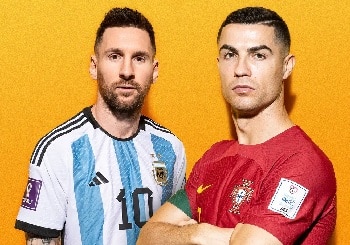 The debate about which player is the greatest of all-time (G.O.A.T.) has the power to divide football fans across the world.

For many older supporters, Pele’s achievement in helping Brazil win three World Cups makes him the undisputed number one.

However, several other contenders have made strong cases to be included in the conversation since Pele weaved his magic on the international stage.

They include Diego Maradona, who dazzled the world with his ability to leave opponents in his wake during his glittering career.

A recent study by football betting site Betway came down on Maradona’s side in the G.O.A.T. debate, although the method used wasn’t particularly scientific.

Despite this, many people still believe that Messi and Ronaldo’s efforts during the 21st century put them in front of the other contenders.

The pair went into the 2022 World Cup in Qatar aiming to finally settle the G.O.A.T. debate by lifting the trophy for the first time.

Messi and Ronaldo have pushed each other throughout their respective careers, most notably when they both played in La Liga.

They rewrote the record books during glittering spells with Barcelona and Real Madrid, winning numerous personal accolades and a ton of silverware for their clubs.

Given what they have achieved in club football, deciding which player is the greatest seems like an exercise in futility.

While fans of Pele, Maradona and Zidane argue their failure to win the World Cup is a black mark against them, the point is harsh on Messi and Ronaldo.

The duo can rightly point to the number of titles they won with their clubs as a good enough reason to put them firmly in the G.O.A.T conversation.

Having said that, winning the World Cup would be the cherry on top of the cake if either Messi or Ronaldo can achieve the feat in Qatar.

While each player has previously helped their respective nations win continental titles, FIFA’s top international tournament is seen as the holy grail.

Ronaldo’s hopes of getting his hands on the prestigious trophy with Portugal seem remote, particularly as he struggled to produce his best form during the group stage.

His team will fancy their chances of defeating Switzerland in the round of 16, but you would be hard-pushed to tip them to progress past the quarter-finals.

By contrast, Messi has produced some impressive performances to help Argentina qualify for the last eight where they will face Netherlands.

He scored twice during the group stage before adding another to his tally as Argentina defeated Australia 2-1 in the last 16.

The Argentinian playmaker seems to be improving with each passing game, which bodes well for Argentina’s chances of winning the tournament for the third time.

If Messi can continue in the same vein, there is every chance he will finally add a World Cup success to his CV and settle G.O.A.T debate once and for all.