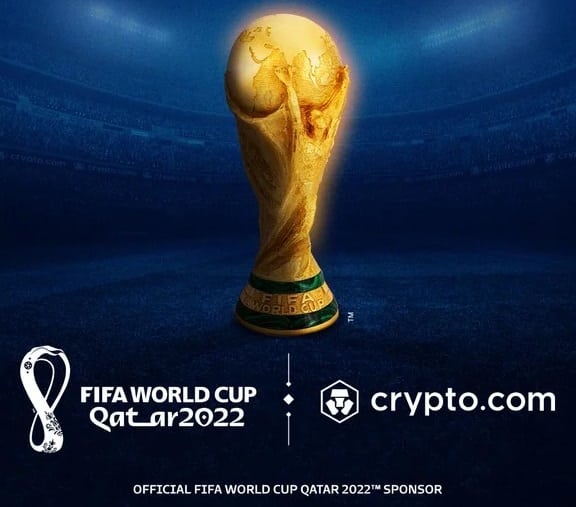 FIFA, on Tuesday, officially announced a deal with one of the world’s largest cryptocurrency exchange and information platform, Crypto.com, as an official sponsor for the 2022 FIFA World Cup.

Cryptocurrency began making its way into football two years ago during the thick of the coronavirus pandemic and now, almost every club has digital assets that can be traded using cryptocurrency, from NFTs to fan tokens.

As cryptocurrency continues to expand its reach in football, FIFA have decided to partner with one of the world’s biggest cryptocurrency platforms to help make the upcoming global showpiece even better for fans.

FIFA’s announcement states that Crypto.com “will be the exclusive cryptocurrency trading platform sponsor of Qatar 2022 and will benefit from significant branding exposure both within and outside the tournament’s stadiums.”

Kay Madati, FIFA’s chief commercial officer, praised Crypto.com for their penetration into the world of sports and hopes that the partnership between FIFA and the platform will yield positive results going forward.

“Crypto.com has already demonstrated a commitment to supporting top-tier teams and leagues, major events and iconic venues across the world, and there is no platform bigger, or with a greater reach and cultural impact, than FIFA’s global platform of football,” Madati said in a statement.

Qatar’s preparations for the World Cup have been taken up a notch as the LOC committee on logistics, the Supreme Committee for Delivery and Legacy (SC), officially announced the launch of accommodation websites for the World Cup.

The Qatar World Cup will be the most compact World Cup in its 92-year history as most of the venues will be in and around Doha, the country’s capital.

This is to help manage the visiting crowd as the country is not specifically blessed with the largest land mass. Also, it is to make accommodation and movement to and fro the venues easy for fans who would rather watch as many matches instead of being confined to just a few games.

Accommodation can now be booked on a dedicated portal with various options to choose from such as apartments, hotels, cruise ship cabins, villas. The committee also notes that the accommodation options suit all budgets and requirements from fans, and will be secured properly.

Hayya cards, a move by Qatar’s government to determine which fans are in the country for the World Cup, were also launched and the website for ordering them deployed on Wednesday.

Saeed al-Kuwari, executive director of Hayya at the SC, said at a press conference on Wednesday that fans who intend to watch World Cup games should apply for a Hayya card alongside their tickets.

He also noted that the Hayya card will be required at Qatar airports for visiting fans and that it will provide other benefits like free public transport for ticket holders on match days. It will also act as an entry permit to Qatar for international visitors.

The Hayya cards will also help in security for the accommodation provided by the SC.