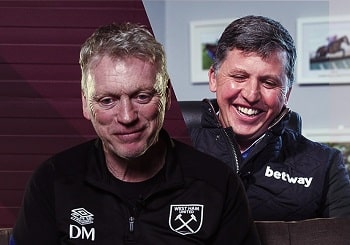 Article: What Being a Horse Trainer and a Football Manager Have in Common

If there were any sports that you might compare for being similar, however actually both sports take serious dedication and hard work in order to be successful. Betway recently put together a chat between Betway Ambassador Ross O’Sullivan and West Ham Football Manager David Moyes, where they discussed what it takes to become a horse trainer and the similarities between that and leading a football team to success.

Whether you’re talking about horse racing or football, one thing that you can be sure of is that there will be passionate fans with something to say on the subject. Over recent years things like horse racing betting and being able to bet on a football match have become much more accessible, with online betting proving popular. This has helped fans to feel involved in both sports and as Cheltenham Festival proved recently is something that sporting fans really love doing.

Approaching The Task At Hand

One thing the chat between the two did show is that they both take an individual approach to training the horse or the player at hand. Rather than have a blanket approach to all training and assume that everyone needs the same teaching, they both look at the task at hand and approach it with a personalised play. O’Sullivan talked about the importance of training the horse well and that 95% of the chances of success comes down to the horse rather than the jockey; although of course the way the jockey rides is important too! When it comes to football teams, each individual player will be important and need their own training regime however it is down to the team working together than really improves the team’s chances of success.

Although football players might be able to take in the enormity of an event more than a horse but need preparation weeks in advance in order to be at the top of their game when the event takes place. A horse may not know that it has an event such as Cheltenham coming up in its diary but there will be changes to its training schedule and the way that it is trained in advance of the event, to ensure that both the horse and the jockey are as prepared as possible for the race when it takes place – football teams and players are likely to go through similar preparations for any big matches.

One thing they both talked about was the drive for success and how they enjoyed celebrating big wins when they happen. They both discussed the excitement of everyone around them when the horse or the team does well and that big events such as Cheltenham warrant a pretty big celebration – something that football teams and fans will most definitely be on board with.

So, on the surface horse racing and playing football may not look like they have very much in common, but as fast-paced sports the way things are approached are definitely similar.