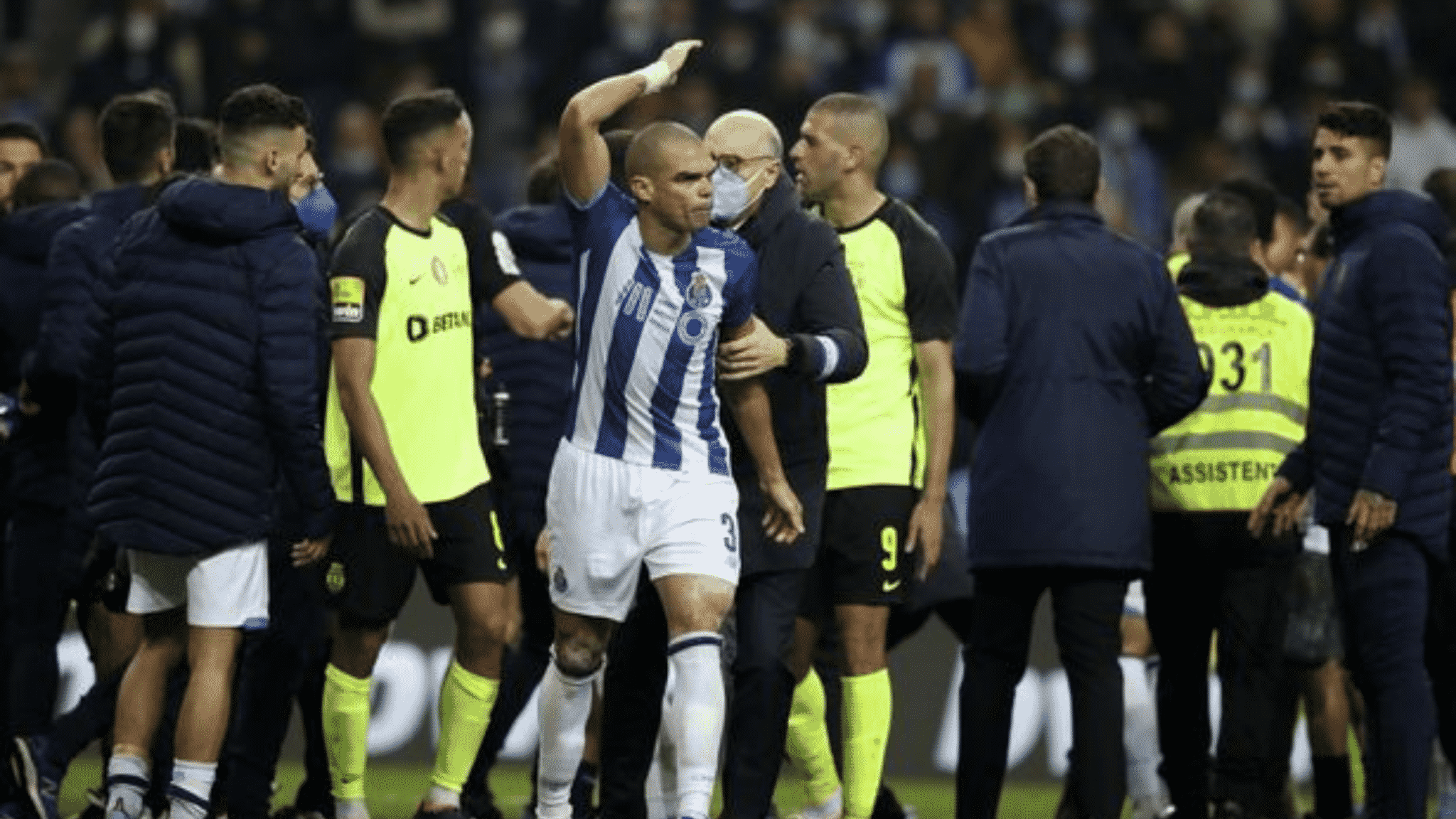 Portuguese defender Pepe was one of four players who saw red after the final whistle in the tense Portuguese Primera Liga match between heavyweights Sporting Lisbon and FC Porto.

The match between Porto and Sporting is Portugal’s biggest football rivalry and this installment of the rivalry had it all. Players gave their all on the field of play as did fans.

Porto fought back from 2-0 down to earn a point after going a man down during the game. Former Liverpool defender Sebastian Coates picked up a second booking for a foul in the game and Porto had to pull all the stops for the point, leading to a number of stoppages during the game.

However, the drama was yet to come as the final whistle opened the floor for an all out 40-man brawl which involved players, ball boys, coaching staff and even members of both clubs’ upper echelons.

Former Real Madrid man Pepe was one of four players who were shown a red card as a result of the brawl after the final whistle. That red card was the defender’s first red card in a league game in 11 years, and his 13th sending off overall.

Pepe is one of football’s most combustible characters which makes the record outstanding. The last time he saw a red card in a league game was in 2011, while he still played for Real Madrid.

He has not been far from a booking or a sending off, however, seeing red cards on the international stage and in club cup competitions in that time.

Agustin Marchesin was the other Porto player to be shown a red card during the brawl, while Tabatha and João Palhinha were the Sporting duo to be sent off.

Reports in the media leading up to the rivalry match contributed to the tensions during the game. Sporting’s coach spoke to the media after the incident.

“Let there be the same investigation that was carried out with Nuno Santos and punish whoever has to be punished,” Sporting boss Amorim said, in reference to the red card shown to Sporting’s Santos against Benfica in 2020.

“It’s a bad example but it’s everyone’s fault, not only of the players,” he added, acknowledging the part the media played in stoking the fire for a full week before the match.

Sporting president Frederico Varandas, who also was at the centre of the incident after his comments about Porto’s president Pinto da Costa, spoke after the game.

Ex-Porto goalkeeper Vitor Baia confronted Varandas in the car park and it took some security personnel to separate both parties.

“This game reflects, for me, what the last 40 years of Portuguese football has been about,” Varandas said. “Of an era where they (Porto) have a president called Pinto da Costa.”