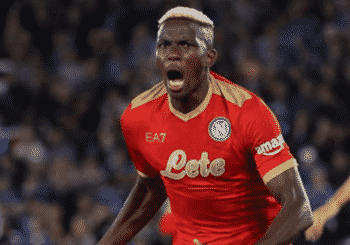 Napoli doctor Gianpaolo Tartaro has issued a statement on the recovery of forward Victor Osimhen, expressing delight over the rate at which the injury is healing.

Osimhen sustained an injury to his cheekbone in November 2021 which left him with a broken eye socket and cheekbones. The injury required surgery and Osimhen’s cheekbone was reportedly held together by six screws to repair the damage.

Napoli predicted that Osimhen would recover enough to start playing by at least March and as a result, the 23-year-old forward was forced to sit out Nigeria’s run in the ongoing African Cup of Nations.

He made a quick return to action in January wearing a protective mask and his rate of recovery has led to Napoli’s doctor to state that Osimhen could be playing without the face mask in a little while.

Osimhen, who has already had a few minutes of action in the Serie A for Napoli in the past month underwent another round of checkups on Tuesday, which led to Dr Tartaro declaring his elation at the Nigerian’s recovery rate.

“Osimhen no longer has scarring or swelling, his biological response to the fractures is better than expected. Every time, he manages to recover quicker than we thought,” Doctor Tartaro said in an interview with Calcio Napoli.

“From today, we have started to reduce the protective mask which he will already wear with Venezia. Fortunately, the supports on which we have downloaded can be modified because the callus has formed.

“We have also listened to his requests to open the view a little. We have enlarged his eyeball, both the upper and lower part.”

Dr Tartaro also admitted that Osimhen has some difficulty playing with the mask but expressly stated that despite the forward’s amazing recovery rate, he can only play and train because of the mask and will do so until at least the end of February.

“Surely, the mask gives him some difficulty but is the only thing that allows him to play,” Dr Tartaro said.

“Until the end of February, he will certainly wear a mask, then after the control scan, it will be decided whether he can take it off or continue to wear it in March.”

Despite his injury, Osimhen drew interest from all across Europe. He was linked with the German Bundesliga and the Premier League. Now, new reports have claimed that nouveau-riche Newcastle United are readying an enormous £116 million bid for Osimhen and one other Napoli player ahead of the summer transfer window.

The Magpies were the Premier League’s biggest spenders in the just concluded winter transfer window and they look ready to spend a lot more in the summer. The new owners of the club are looking to emulate Manchester City and Paris Saint-Germain, who, after their acquisitions by rich individuals and consortiums, slowly took key places in the higher echelons of European football.

Newcastle United are willing to spend £116 million on Osimhen and reported Manchester United target Fabian Ruiz. Napoli have been encouraged to accept the offer if it comes by Italian pundit Paolo Del Genio.

Italian football journalist Paolo Bargiggia reported that the deals for both players are £33 million for Fabian Ruiz and £83 million for Osimhen this summer. Del Genio believes the offer to be too good to pass on and says Napoli manager, Luciano Spaletti, could use the funds to strengthen every area of his squad.

“Accepting €140m for Fabian and Osimhen from Newcastle in the summer? That’s right. If they stay up,” Del Genio said on Radio Kiss Kiss.

“Even if you don’t replace those two with two equally strong eventually, however you can be stronger as a squad and in football you win with the squad.”

Ruiz is a target for Manchester United should they be unable to lure Declan Rice away from West Ham United and Newcastle is looking to make a statement by beating the Premier League’s most successful club to a signing.

Osimhen is also on the radar of the big Premier League clubs and Newcastle is looking to make a statement with that signing as well.