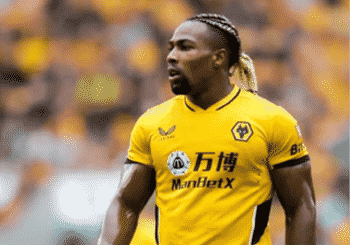 Tottenham Hotspur have lost the race to sign Adama Traore from Wolverhampton Wanderers but have begun to identify alternative targets to the Spaniard.

Spurs boss Antonio Conte faces a key obstacle in signing his preferred wingers in the January transfer window, as his frustrations over recruitment of targets continue. A deal was supposedly struck with Wolves for the 26-year-old Traore but the player was unsure about the move to North London where he would have been converted into a right wing-back.

Instead, Traore opted for a loan move to Barcelona that, according to reports, is all but official with a medical scheduled for Friday. Another key point to note is that Spurs reportedly offered Traore £120,000-a-week to sign but many unconfirmed reports claim that Traore chose to move to Camp Nou for figures even lesser than that.

Spurs are not giving up, as they reportedly have alternative targets to fall back on after failing to land one of the Premier League’s best dribblers and ball carriers. The Athletic reports, however, that Matt Doherty must first be moved on to make room for any of the alternatives.

Middlesbrough’s 21-year-old Djed Spence, currently on loan at Nottingham Forest, is one of the targets and is valued at around £15 million. However, he will not be able to join up with the Spurs squad until his loan spell concludes at the end of the season.

Colombian winger Luis Diaz could also become a Spurs player soon, even as reports claim that Conte would keep him in attack. Spurs have also reportedly had a £38 million bid already turned down by FC Porto for Diaz this week, but remain confident of landing the right winger.

Conte’s appointment was seen as a way for the club to get back to the top and attract top talents. The 52-year-old was fresh from a hugely successful stint with Inter Milan and rejected the job in the summer, leading to the appointment of Nuno Espirito Santo.

The Italian joined after a promise of being backed in the transfer window but with the first window of Conte’s tenure almost shutting and no significant activity in the transfer market by Spurs, fans have begun to worry.

Conte’s tactical nous depends on marauding wingbacks who can contribute equally in attack and defence, and Traore was supposedly fancied by Conte for that role on the right of his formation. The Spaniard has slipped from their grasp, and time is running out for any reinforcements.

There have been no departures either as the club has been unable to sell the players they consider surplus to requirements like Doherty, Tanguy Ndombele and Dele Alli.

Tariq Lamptey has been suggested to the Spurs hierarchy by former Leeds United attacker Noel Whelan as a solution to the club’s wingback issues.

Lamptey left Chelsea for Brighton and Hove Albion in 2020 in search of regular game time and has since found success with the Seagulls. His performances under manager Graham Potter – who is linked to many top jobs in England – is one of the reasons that Brighton play so well currently.

Lamptey is now attracting attention from his former club Chelsea, as well as other clubs in the league and Whelan has advised that Spurs get in on the action and match his £50 million valuation.