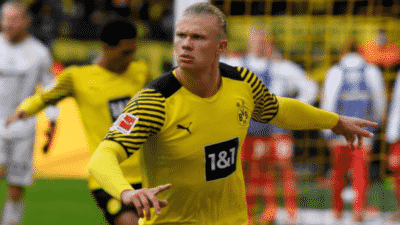 Erling Haaland Speaks on Reasons for Outburst Against Dortmund

Erling Haaland has explained why he spoke out against Borussia Dortmund early in the January transfer window as speculation over his future continues.

The 21-year-old Norwegian is likely to leave the Westfalenstadion after his release clause kicks in at the end of the season with several clubs interested in the striker. Borussia Dortmund are also hoping to be able to keep the player, whose contract still runs until the summer of 2023.

However, with his agent Mino Raiola cooking up a storm in the media and the big money approach of several clubs to the German side and the player’s entourage, Dortmund look to be fighting a losing battle in their bid to keep Haaland at the club at least until his contract runs out in 2023.

As a result, Dortmund chief Hans-Joachim Watzke came out with a statement earlier in the transfer window in which he gave Haaland an ultimatum to decide if he would be staying at the club beyond this season, or leaving. Watzke explained that this ultimatum was to help the club plan for life after the most prolific striker to ever don the black and yellow jersey of Dortmund.

Haaland lashed out at the ultimatum in a post-match interview earlier in the month, after scoring two more goals for the club. He told journalists that he would take immediate action on his future, comments which have sparked an even bigger frenzy for all involved as the battle for his signature heats up.

The big Norwegian has now come out to explain why he lashed out at the club, who he admitted he was only focused on for the rest of the season.

“I felt it was time for me to say something. Many others were talking, so that was it,” Haaland said in a recent interview with Sky Sports Germany.

“And now I really don’t want to say much more about it. What was said, was said, and we move forward.”

The 21-year-old striker is the third youngest football player to reach the 100-goal career milestone, behind legends Ronaldo De Lima and Pele. For Dortmund, he has scored a staggering 80 goals in just 79 appearances and is less than 50 goals shy of the 200 career goals milestone.

Yet, his hunger for more keeps him going, making him one of Europe’s deadliest finishers. His motivation, however, comes from one of the unlikeliest of players.

In the interview with Sky Sports Germany, Haaland says he watches Jamie Vardy regularly to learn more about finishing, and described the Leicester City and Premier League legend as the “best in the world” in getting past defenders.

He said: “Not studying, but I’ve been watching a lot of players. Let’s take an example, the run in behind the centre-back when the number 10 has the ball.

“You maybe have the best in the world at that in Jamie Vardy, I’ve been looking a lot at him on exactly this.”

Vardy holds multiple records in Leicester and a few in the Premier League, and at the age of 34, doesn’t look to be slowing down soon. Many fans wonder what could have been of the Englishman if he had bloomed earlier, but since he hit his stride at the age of 29, he hasn’t looked back.

Haaland looks to the Foxes star for inspiration, and believes he can improve every aspect of his game like Vardy.

The former Red Bull Salzburg man, however, stated that he has only one career goal, which is to remain injury-free. At 21, he has missed a substantial number of games due to injury, prompting thoughts that his numbers could be a lot more if he had stayed fit.

“But if I should improve one thing, it would be to not get injured, because if I am not injured, I will play a lot more games, and I will deliver even better,” Haaland added.

“If you were to ask what my goals are for 2022, it is to not be injured, and the goals for the rest of my career are not be injured. That’s the main thing.”