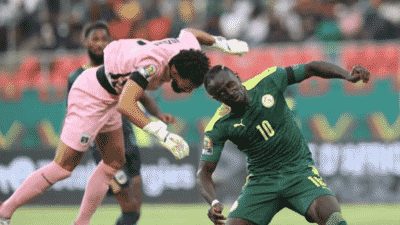 Sadio Mane has been declared fit by doctors after a head collision that left him dazed and is cleared to play for Senegal ahead of their quarter final game against Equatorial Guinea in the ongoing African Cup of Nations tournament.

Sadio Mane was forced off the pitch during Senegal’s 2-0 round of 16 victory over Cape Verde on Tuesday after a clash of heads with Cape Verde goalkeeper Vozinha. Mane had to be attended to for an extended period during the game, but came back on to keep playing.

He eventually scored the first of the two goals which earned Senegal a place in the quarter final but the collision did more damage than the on-pitch medics could determine, leading Mane to ask to be substituted.

After tests and X-Rays, Senegal’s doctor Abdourahmane Fedior has declared Mane fit, claiming he has no concussion symptoms and will be able to face Equatorial Guinea with the Teranga Lions on Sunday.

“All the symptoms he had on the pitch are gone,” Dr. Fedior in a statement released by the Senegal FA. “His condition requires fairly close monitoring. Everything is normal on the X-ray.”

The decision to allow Mane to continue after the collision did not sit right with brain-injury charity Headway, who heavily criticised the decision to keep Mane on the field through their deputy CEO Luke Griggs.

Griggs said in a statement: “This was a sickening collision that clearly left both players in enough distress for a concussion to have surely been considered a possibility at the very least.

“At that point, the principle of ‘if in doubt, sit it out!’ should have resulted in Mane being substituted without another ball being kicked.

“The image of the player collapsing on the ground and having to be helped from the pitch after scoring his goal should tell you everything you need to know about the impact and the effect it had had on his brain.”

“Yet again, the desire to win is seen as being worth serious risks to players’ health. It is simply shocking that this continues to happen.

“This is now a real test of leadership for the Confederation of African Football and world governing body FIFA – particularly if Senegal declare Mane fit for Sunday’s quarter-final. If football wants to be taken seriously when it comes to concussion, it simply must take action to enforce and strengthen its protocols.”

Mane – the reigning African Footballer of the Year – later posted a picture of himself with Cape Verde goalkeeper Vozinha from the hospital on social media on Friday, with the caption “recovering”.

The forward is a key figure in the Teranga Lions hopes of winning their first ever AfCON title, and are one of the key favourites to win the title in this edition.

However, Daily Mail reports that Liverpool have urged Mane to sit out the match as they fear that he is not fully fit even with the tests and X-Rays showing no signs of serious injury.

Liverpool have also contacted the Senegalese football authorities to express their fears over their star forward’s condition with hopes that they do not field Mane against Equatorial Guinea on Sunday and let him recover.

Meanwhile, Senegal manager Aliou Cisse is unhappy with the suggestions that the Teranga Lions are not considering their players’ health.

Aliou Cisse is unwilling to accept the claims and suggestions, who are citing Mane’s case as reason. The Cape Verde goalkeeper was removed promptly from the game before being sent off as he was the one who rushed into the rash challenge, but Mane played for another 15 minutes before the collision took its full toll on him.

Sources close to Liverpool as well as observers of the tournament, including brain injury charity Headway, have called for the head of the Senegal national team handlers for taking such a risk with a very important player.

“I can reassure you that the health of Mane and all the players I have at my availability at the moment is very important,” Cisse told GOAL defiantly ahead of Sunday’s AfCON quarter final against Equatorial Guinea. “We don’t play with our players’ health, nor do our doctors.

“We are professionals as well, so while the result is important, the health of our players doesn’t go above the importance of the results.”