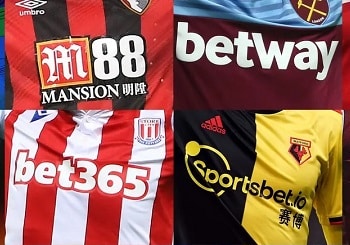 End of an Era? Anticipation Builds for Betting Sponsor Bans

For many years football clubs in England and abroad have enjoyed betting and casino firms decorating their team shirts. However, that era is coming to an end as English authorities discuss betting sponsorship bans, a decision expected to be released within the near future.

Just as British football enjoyed coming back to the audience-filled stadiums, a new factor for concern was added to the mix. In Great Britain the authorities are currently discussing a betting sponsorship restriction. This restriction would largely focus on foreign betting companies, but might extend to domestic gambling companies as well. However, the situation is complicated as gambling firms make up a large portion of the financing for English football, and vice versa. Furthermore, exposure does not only come from shirt sponsors – if pitch side advertisements are included, there can be up to 700 exposures to gambling advertisements in one single game.

Gambling restrictions as a global trend

The UK is not the first country to consider restrictions in the gambling realm. As a matter of fact, several countries have initiated gambling restrictions during the last year due to the heightened economic vulnerability stemming from COVID-19. These vulnerabilities are enhanced during the pandemic as the restrictions have forced people to stay home, and in some cases even led to unemployment and/or lower income in combination with a lack of entertainment events to attend.

Consequentially, people may turn to games such as poker, video slots, and other exciting games to maintain some degree of excitement – and time consumption – in their daily routine. Consequently, states mean that the widespread advertisement of betting and casino sites in sports encourage over-indulgence in gambling habits, and therefore affects national health.

The discussion on betting sponsorship bans in football began in October 2020 when the Italian government issued a statement saying that betting sponsorships would be banned at the end of the season, and that by then clubs should have ended all contracts with such companies. As a result, several La Liga teams started the 2021-22 season with empty shirts and without replacement head sponsors. The reasoning behind the ban was that it puts many of football’s younger and/or vulnerable populations at higher risk for gambling addiction.

According to The Guardian, the UK government is to release a statement within the next few weeks. It is suspected that a complete ban on betting logos appearing on team shirts will be implemented. It is also possible that the new restrictions will attempt to attack what is called the “white label” system, which is where UK based firms rent their UK gambling license to foreign firms who can then advertise in a variety of languages at sports events despite it being technically illegal.