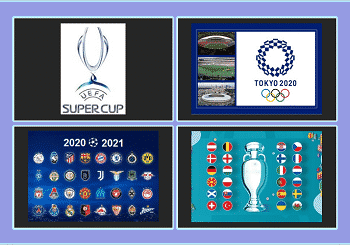 According to FIFA, 5 billion people all around the world are football fans. It means that two-thirds of the population on the planet follow major football events. Indeed, football is the most popular type of sport in the world. The pre-pandemic years gathered dozens of thousands of fans in stadiums. In addition, millions of fans watched matches online. However, the pandemic has changed everything. The schedules of major events also were changed. Most of them were postponed. If you missed some of the events held this summer, keep on reading the post. Down below, you will learn more about the top football matches that you might have missed.

Initially, it was the EURO 2020 event that was postponed. Consequently, the championship took place in the summer of 2021. It was a tough fight among 24 strong teams. Eleven different cities held the event. It lasted for one month, so there were a lot of engaging games to watch. According to the statistics, there were 142 goals. On average, every match had 2.78 goals per game. Cristiano Ronaldo (Portugal), Patrik Schick (Czech Republic), and Harry Kane (England) are considered the top players of the tournament.

The fight was tough until the final goal. In essence, Italy has won the championship, which happened for the second time in the history of the EURO football tournament. The last time they became winners was in 1968. They played that last match with England. Unfortunately, they had a 1-1 draw, so the penalty session has become a decisive factor. Nevertheless, the Italian team managed to win 3-2 on penalties. It’s highly recommended to watch the game again if you missed it because it is full of breathtaking moments and real emotions.

This summer, Tokyo held the Olympic Games, one of the most popular sports events worldwide. It also had a football tournament that most fans of the game followed. Unlike most football championships, the Olympic Games gather teams from worldwide, so it was quite hard to predict the winners. There were a lot of matches of both men and women football teams. Therefore, people needed to spend a lot of time watching them. Fortunately, students could follow all of them because they didn’t have to study in the summer. The question, “Who can write my papers for me?” didn’t bother them at all.

However, if you’re not a learner, you probably missed many great moments of the matches. In essence, the team from Brazil has won the gold medal. The teams from Spain and Mexico got second and third place correspondingly. However, there are entirely different results among the women’s teams. The women’s football team from Canada has taken first place. The team from Sweden achieved the silver medal. The USA soccer team got third place.

It is a game of the champions. The best teams are forced to compete to find out which one is the #1. The winners of the Champions League and the Europa League have to compete with each other. This summer event was held in Belfast between Chelsea and Villarreal, the winners of the mentioned championships.

Chelsea participated in this tournament four times. In 1998, the team won it once. However, it was the first Super Cup game for Villarreal, so a low number of people expected them to win. The outcome impressed all football fans. There was a 1–1 draw by the end of the match, so the penalties helped find a winner. After many shots, Chelsea finally could win the match with the 6-5 score on penalties.

It is one of the most viewed football events globally because it gathers powerful teams in a stadium to find the best one. Moreover, it results in a tough and spectacular game that keeps fans in tension till the last minute. This year, the championship had to be hosted by Turkey at the Ataturk Olympic Stadium in Istanbul. However, due to the Covid spread, it was decided to play the game in Portugal.

It didn’t make the match between Manchester City and Chelsea boring. The first team didn’t have any games played in the tournament. However, Chelsea has already participated in the championship twice and won it once in 2012. Accordingly, Chelsea has won the game with a 0-1 score. Kai Havertz made the decisive shot.

The football events mentioned in the post above have shaped the summer of true fans who don’t miss any game. However, there is nothing wrong if you don’t prioritize football championships. This brief overview of the games above will help you understand the important football events this summer. In case you have some spare time, it’s recommended to watch the missed matches. You will be impressed by all the moments that kept the tension high.