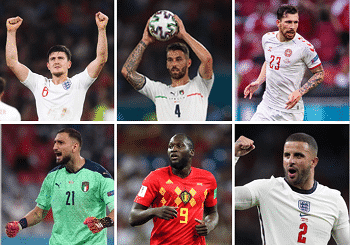 Article: The Best Players in Euro 2020 by Jonathan Lewis

Euro 2020 was a showcase of some of the best football talents in Europe. But perhaps the most exciting bit is that the most successful countries at the competition didn’t have world-class players.

Portugal had Cristiano Ronaldo. Belgium had Romelo Lukaku and Kevin De Bruyne. France had Pogba, Griezmann and Kyle Mbappe. Portugal had Robert Lewandowski while Spain was represented by the likes of Sergio Ramos and Alvaro Morata.

Yet, none of the countries we have mentioned above won the competition. Instead, Italy took the trophy home after defeating England through a penalty shootout. That said, below are 11 of the best performing players during this year’s Euro 2020.

Italy’s Gianluigi Donnarumma is now a PSG player, a contract he sealed mainly due to his heroics during the euros. At the start of the competition, Donnarumma was a free agent not sure where he would go after leaving AC Milan.

At the end of the tournament, the 22-year-old made two vital penalty saves and ultimately helped his country win the Euro 2020 trophy.

Manchester City’s Kyle Walker was a man to watch throughout the Euro 2020 tournament. He lived up to the hype. He played six games, and completed four tackles. He recovered the ball 40 times and made 15 clearances.

Perhaps the more intriguing reason Kyle deserve this recognition is that he had a passing accuracy of 89%. Was Walker in your Euro 2020 squad builder? No right back had better stats than the 31-year-old, affirming he truly belonged in the official Euro 2020 team of the tournament.

The main reason Italy won the Euro 2020 was due to the team’s incredible defense. The blues finished the group stages without conceding a goal, and Leonardo Spinazzola played a part in this great defense.

The Juventus left-back played just 379 minutes in four matches but was impressive enough to make it to the first eleven of the best players at Euro 2020. The 28-year-old completed one tackle, three clearances, three blocks and recovered the ball 27 times.

Harry Maguire was arguable the best defender in England’s team. Likewise, Leonardo Bonucci was the best center back in Italy’s side. To be fair, John Stones and Georgio Chiellini would have been great replacements. They had outstanding performances too.

However, Maguire, despite playing two games fewer than Stones, had more recovered balls (34), more clearances (10) and more tackles (six). Bonucci, by comparison, played seven games for Italy, during which time he had a passing accuracy of 89%.

He also scored a goal for his country in the 67th minute of Italy versus England, becoming the oldest player (34) to score at the competition.

According to UEFA, Jorginho, Hojbjerg and Pedri were the three best midfielders in the EURO 2020.

Without a doubt, Jorginho deserves to be in the starting lineup. Although he didn’t score, the Chelsea defending midfielder player his role splendidly.

Jorginho played seven matches for Italy, completing 705 minutes with a passing accuracy of 93%. Jorginho recovered the ball 46 times, 11 tackles and completed a distance of 86.6 kilometers.

Tottenham’s and Danish midfielder Pierre-Emile Hojbjerg was a surprise star of Euro 2020. No one expected him to impress as much as he did. Yet, after playing six matches and completing 570 minutes, his stats speak well of his performance.

The 25-year-old, made nine attempts at goal-scoring and assisted three times. He recovered the ball 36-year-old and covered a distance of 64.1 kilometers. The midfielder’s impressive run obviously had a huge impact in helping Denmark reach the semi-finals in Christian Eriksen’s absence.

Spain was underwhelming during this year’s Euro 2020 competition. However, a few of their players stood out. Pedri was particularly impressive in the midfield, playing six matches despite being 18 years-old.

The Barcelona youngster was also an ace passer, distributing the ball around the field with a 92% passing accuracy. He never scored nor assisted. But for a player of his age, passing accuracy and being a target of fouls, he showed to he deserved to be in the team of the tournament.

At the start of the Euros, the three favorites in the attacking positions were Cristiano Ronaldo, Kyle Mbappe and Harry Kane. All the three players certainly showed their worth after scoring a combine 13 goals. But here’s who made it to the official list:

No one is surprised by Sterling’s outstanding performance at the Euros. Everyone expected him to shine. And after scoring three goals and one assist, he helped team England reach to the finals.

Depending on who you ask, Cristiano Ronaldo deserved to be in the official top eleven more than Lukaku. He was the leading goal scorer in the tournament (five). So, why pick Lukaku over Ronaldo?

The Belgian scored four goals in four matches, two goals in his right foot and two in his left foot. Also, he scored the four goals in just six attempts, helping his country reach to the semis.

Federico Chiesa plays as both a midfielder and as a front winger. In this year’s euro, he mainly played among the front three. He played in seven games, and scored two goals after 17 attempts. Unsurprisingly, fans felt Chiesa didn’t deserve the spot and instead Patrick Schick, who scored five goals for Czech Republic, should have been picked.

UEFA picked a pretty solid lineup for the official team of the EURO 2020 tournament. Most players deserve to be on the list. You probably have your own official squad of the season and that’s alright. The focus now is to see how the players who stood out in the Euros will perform for their individual clubs in the coming season.