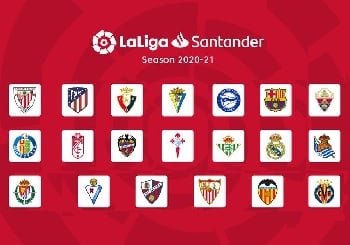 Article: La Liga is More Unpredictable and Competitive Than Ever

The Spanish La Liga has come of age. Gone are the days when Barcelona and Real Madrid would have been labeled the obvious candidates for the title, even before the beginning of the season. We have witnessed a shift, with the likes of Atletico Madrid and Sevilla providing reasonable challenge over the last couple of seasons.

Flashforward to the 2020/2021 season, we have a more competitive league in our hands. Betting has never been this thrilling for punters. Spin online casino is the centre of everything gaming and gambling, and the excitement cannot get any bigger. There are so many online games for every player, and mixing it with some betting on sports online only makes it spicier.

Going into the weekday fixtures, pacesetters Real Sociedad had a date with struggling giants and former champions Barcelona. Willian Jose drew first blood on the 27th minute to put more pressure on Barcelona, who came into the fixture at an unfamiliar 8th place on the log. Jordi Alba restored parity 3 minutes later before Dutch midfielder Frankie De Jong established the lead a minute before the break.

The loss took Sociedad to second, meaning Diego Simeone’s side overtook them without kicking a ball. Atletico are level on points with Sociedad and perennial rivals Real Madrid at 26, albeit having played two games less than Real Madrid and 3 less than Sociedad.

Still a long way to go before the season can be decided, but the top teams have performed dismally by their standards. Barcelona, even after appointing former Dutch national team manager Ronald Koeman, have been stuttering. Losses to Getafe and newcomers Cadiz, and a home loss at home in the latest El Classico means the Catalans have had their worst league start in the decade.

Talisman Lionel Messi has looked a pale shadow of himself, scoring a paltry 5 goals after 12 rounds of matches. Injuries to Phillipe Coutinho and stalwart Gerard Pique have left conspicuous gaps in midfield and defence, respectively.

At the capital, Real Madrid have also lost to Cadiz, a struggling Valencia, and Deportivo Alaves. These are teams Madrid would have been expected to pick all three points from in an ordinary season easily. Manager Zinedine Zidane could be forgiven for going through tough fixtures in the European Champions League, but weren’t the likes of Atletico, Sociedad, Sevilla, or Villareal involved in continental assignments as well?

It will be difficult to predict the ultimate winner for La Liga this season. Atletico will be heavy favorites if they can keep playing the way they are, not conceding many goals, but you cannot rule out Real Madrid and Barcelona turning things around in the upcoming fixtures. Real Sociedad cannot be ignored, but they’ll need to convert their many draws into wins. Sevilla and Villarreal are other strong contenders who will be around the top 4, probably throughout the entire season.

Notable underperformers this season so far include Valencia and Athletic Bilbao, who sit at 12th and 13th respectively, having played 13 matches each.