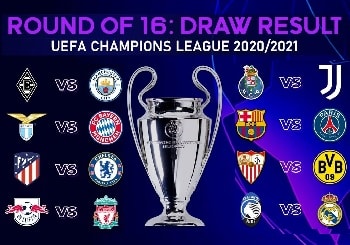 I wonder if this is the season we shall see a new name on the `Big Eared` trophy. Are newbies RB Leipzig or Atalanta possessed of enough stamina, and nerve, to win seven games or will PSG finally buy their way to UEFA Champions League success or will it be yet another familiar name adding yet another UCL title to an already long list of triumphs?

Manchester City have struggled to score goals all season and for a side that can call upon the talent they have it is a worry for Pep Guardiola to put that into black and white. I am not going to be the one to state the blatantly obvious, well I am, but even a half fit Sergio Aguero is better than most strikers in the world. If Sterling and Jesus step up to the plate, Torres already has, they should have too much for BM who are struggling in the Bundesliga, well off the pace of the leading clubs. But it is still only December.

Of course no one knows what is going to be the situation come the spring regarding Covid-19 and crowds, but playing the second leg at home with some fans, would help City’s cause. It will be interesting to see if Pep brings in another centre back, although John Stones is back in the saddle, and another, goal-scoring striker.

Manchester City to go through, but they won’t find it easy.

What has happened to Lazio, wallowing back in 9th place in Serie A, a full ten points behind leaders Milan after they finished fourth last season to reach the UCL. The Rome club has been doing well in Europe and picked up some good results, including a 1-1 draw at Dortmund after beating the German side 3-1. Still, it seems they are putting all their eggs in one UCL basket, because they are leaving themselves an awful lot to do to reach European qualification via this season’s league positions.

Bayern will be feeling confident they can succeed against Lazio, but despite the fact they have been doing well in Europe they aren’t having a good time in the Bundesliga. But the German outfit are resilient of nothing else and will believe they can turn things around on the domestic front. They are still favourites to hold onto their crown.

Bayern to go through

Frank Lampard’s team seem to be alternating between potential realisation and merely potential. They possess an abundance of talented individuals but seem to lack leadership, other than Azpilicueta, and often those individuals struggle as a unit. Chelsea fans will be hoping that Frank will stick with Olivier Giroud to lead an often misfiring attack, because without the Frenchman, who is still a world class striker, the little chance Chelsea have against one of the most experienced European teams will be even worse.

Then there’s the little matter of Diego Costa facing his former club. I don`t think the striker ever appreciated British football culture and his single-minded street-fighter approach wasn’t everyone`s cup of tea but I bet Frank would have him back in a heartbeat.

I am looking forward to Silva v Costa, rapier v sabre, and a jagged one at that. Brain v Brawn, I can’t wait.

I think if Chelsea come back from Madrid less than two goals adrift I think they might just do it at the Bridge, but if I had to bet my house on it I would say Diego Simeone’s side is the last team in the UCL you want to try and score twice against.

Atletico for the quarter-finals

I am so pleased to see Red Bull in the last 16 after tipping them in the group stage. They will provide the kind of stiff test Liverpool will need if they are to reach the quarter-finals. I doubt Jurgen Klopp will underestimate the Bundesliga outfit that went to Bayern Munich earlier in December and ground out a 3-3 draw, as Manchester United did  to their cost. They have an incredibly mean defence and in their first 11 league games they have conceded just nine goals and are the joint best defence in Europe`s top five leagues, with Juventus. Although Sporting in Lisbon have only conceded seven but they have only played nine games.

Liverpool are not at their best defensively, which is a bit of an understatement, but despite the long-term injury to Jota they can still outscore most teams, except Fulham.

With Allison back between the sticks I take Liverpool to go through but it will be hard going and although I think they might lose in Leipzig, they should have too much for the impressive Red Bull team.

Liverpool to go through

Cristiano Ronaldo will be delighted to be back on home turf as much as Juventus will be happy to have got the most favourable draw they could have wished for. Porto are positioned third in their domestic league while Juve although fourth in Serie A are one of only two unbeaten teams in Italy, the other being leaders Milan.

I think Juventis will be far too strong for Porto who really need a good result in the first leg, but whatever the score-line in Lisbon I expect the Italian club to be in the hat for the last eight.

Already billed as Messi v Neymar this game is about a lot more than individual players. In the group stage I wrote it was mainly a question if PSG could top the group, they did. The next phase of their quest to finally win the UCL is this game which is the game of the round, because if the Parisian club oust a struggling Barca side they will be laying down a marker to show they are ready to step up a rung or two on the hierarchy of top European clubs.

At the time of the draw Barcelona were in unknown territory, 8th in La Liga.

But at the time of writing, the world and his club, were awaiting news of the injury Neymar sustained in the shock defeat to Lyon which dropped the usual League I leaders to third in the table. It is much too early to speculate on the Brazilian`s participation in a tie still three months away, but it is safe to say that with Neymar PSG could qualify, without him, maybe not.

I think the key factor might well be Barca being at home in the first leg. Were it the other way around I would fancy the Catalonian outfit, but putting the Neymar factor aside for several months, I have a gut feeling it will be PSG in the quarter-final draw.

PSG for the last eight

As the draw for the Round of 16 was being made Dortmund were making their own headlines by sacking coach Lucien Favre in the wake of a 5-1 home drubbing by newly promoted VFB Stuttgart. At least whoever replaces him will have a decent amount of settling-in time before the spring.

Sevilla have a most illustrious Europa League record, but have struggled to adjust to the transition to the senior European club competition. They have made a poor start to La Liga and at the time the draw was made they were seven points adrift from leaders Real Sociedad.

Whoever takes the reins at Dortmund they will have a talent-packed squad which should have too much for Sevilla so I take the Bundesliga team to reach the last eight.

Borussia Dortmund for the quarter finals

In the days when they languished in the lower tiers of Italian football, Atalanta could only have dreamed about a UCL tie against Real Madrid. This proves dreams can come true and yet another team I highlighted in my group stage preview has come good.

The Serie A team are a team of extremes. They folded disastrously at home to Liverpool then went to Anfield and played the Reds off the park. On the basis of their home and away records Atalanta will probably be grateful they are at home in the first leg against a Real team that is still looking for its own identity this season. They struggled in the group stage and left qualification pretty late before finally winning group B when for a long time it looked like they might not make it.

I will stick my neck out here and predict a seismic shock, Atalanta to go through, UNLESS they freeze with a large dose of stage-fright.

BUT, the biggest factor is the best part of three months before the game in the Round of 16 commence.