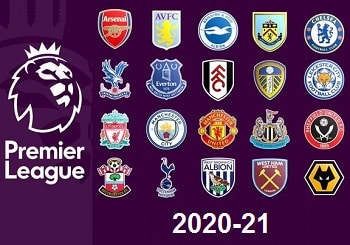 Article: An Overview of the English Premier League Season 2020-21 So Far

What makes the Premier League special over all the other national leagues is the fact that it’s spontaneous, meaning anything could happen, and the matches can be highly unpredictable, a lot more often than in other countries. This makes betting on websites like bettinghouse.vip and more, a lot more fun within this particular league, as you never know what to expect, especially within this season, we are seeing results we never would have expected to see, and it just keeps getting more and more spontaneous.

Let’s have a look at the League Table.

In first place, we have Leicester City! With eight matches played, six wins, two losses and no draws, giving them a spot at the top of the table with a total of eighteen points. Leicester have already shown us that they mean business when they had won the premier league a couple years ago, against all odds, to everyone’s big surprise. Nowadays, they have earned their spot at the top of the league with great performances and impeccable sportsmanship.

Coming in at a close second and third, with just one point less than Leicester, are Spurs and Liverpool. Both are currently playing a very good season, with an identical five wins, two draws and one loss each. Both teams are showing great promise and are off to a decent start with very good games and attractive score lines. Let’s not forget last week’s win against Man United with a score of 6-1! No one would have guessed it.

The fourth spot on the table at the moment is occupied by Southampton. These underdogs have managed to reach an honourable place the table with five wins, one draw and two losses, Giving them a total of sixteen points.

Tied up in fifth and sixth place, are Chelsea and Aston Villa, with a total of 15 points each. The two teams are both doing well in the season, however Aston Villa have the upper hand, having played one less match than all the above mentioned teams, meaning, once they play their next match, they have a chance to make it to the top and tie with Leicester City, if they manage to beat Brighton next Saturday. I wouldn’t be surprised though, as earlier this season they had beat Liverpool with a score of 7-2!

Following up are Everton in 7th, Crystal Palace in 8th, Wolves in 9th, Man City in 10th, Arsenal in 11th, West Ham in 12th, Newcastle in 13th, Man United at an all-time-low at 14th place, Leeds right behind them in 15th, Brighton and Fulham in 16th and 16th, and West Brom, Burnley and Sheffield are at the last 3 spots, facing the risk of relegation. 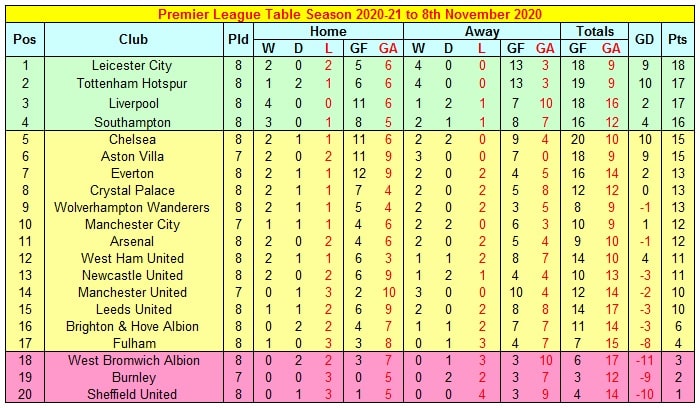