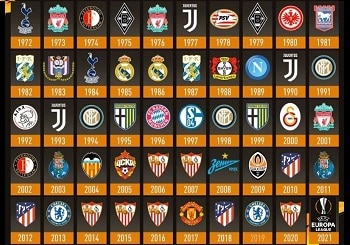 The current UEFA Europa League began in a very different format and a bye-gone era, back in the 1950s, as the Inter Cities Fairs Cup – always preferred that name to its modern equivalent. It was a series of friendlies played between cities that hosted international trade fairs. Initially the competition was open only to those cities who staged bona fide trade fairs, such as Milan and Barcelona and where in their domestic league the representing teams finished had no relevance whatsoever.

The early competitions had a one city-one team rule although post 1968 it had the rather disparaging nickname of  “the Runners-up” Cup when it was based on league position.

Originally administered by the Fairs Cup Committee, led by senior FIFA officials, it eventually came under the auspices of UEFA and with that new ownership came a new competition, the UEFA Cup, new trophy and a new set of regulations. And while UEFA does not recognise clubs` previous Fairs Cup record, FIFA does.

The initial Fairs Cup competition took place between 1955 and 1958 and the first finalists were; A London X1 and Barcelona. A 2-2 draw between the sides was staged at Stamford Bridge but the second leg was very one-sided with Barcelona, assisted by one player from the other club in the city, RCD Espanyol, running out 6-0 winners for an aggregate score of 8-2 to lift the first Inter Cities Fairs Cup.

A second tournament was staged between 1958 and 1960 when the group stage format was replaced by a knock-out tournament. Barcelona retained the trophy beating Birmingham City 4-1 in the Final.

Spanish teams dominated the Fairs Cup until 1968 when Don Revie`s Leeds United won the trophy, 1-0 on aggregate, against Ferencvaros. Newcastle United kept the trophy in England the following year when they beat Ujpest Dozsa 6-2 on aggregate, including a 3-2 win in Hungary.

UEFA took over the competition in 1970-71 and re-branded it the UEFA Cup and scrapping the one-city one-team rule which had kept many a team from entry into the competition because another team from their patch finished higher in the table. After a one-off game for ownership of the original Fairs Cup trophy, Barcelona beat Leeds United 2-1, the following season, saw two English teams contest the first UEFA Cup Final when Tottenham Hotspur beat Wolves 3-2 on aggregate. Until 1997, when the two-legged Final was replaced by a one-off game, the UEFA Cup was won by some of the top European sides.

Real Madrid, Bayern Munich, Inter Milan and Juventus all lifted the trophy,  Liverpool triumphed in 1973 and 1976 and Bobby Robson steered unfashionable Ipswich to the trophy in 1981 with a crushing 7-2 victory over AZ Alkmar and Spurs won it again in 1984. And, talking of unfashionable clubs, the last winners of the UEFA Cup were Schalke 04 in 1997 when they shocked Inter Milan 1-0.

But Inter bounced back the following year as first winners of the one-match at a neutral venue, UEFA Cup, beating Lazio 3-0. Eight different clubs won the UEFA Cup in the following years which demonstrated the quality of teams that played in the competition but then up popped the team that has become synonymous with the trophy ever since, Sevilla.

The La Liga club won in 2005 and 2006, matching the record of Real Madrid as consecutive winners. The competition became the Europa League in 2009 and immediately provided a first European success for the Ukraine with Shakhtar Donetsk who beat Werder Bremen 2-1.

Then in 2014 Sevilla cemented their name in football history by winning the first of three consecutive Europa League Finals and to underline their domination of the competition they won it again, for a sixth time, in 2020 when they beat Inter Milan 3-2.

In the days when there were three competitions for European clubs; the European Cup, the European Cup Winners` Cup and the Fairs Cup for some unknown reason that was also considered the order of merit in terms of importance. But what many did not consider was, for example, many a team that came close to its domestic league title did so narrowly and were almost league champions and therefore brought that quality into the erroneously named `runners-up` cup. A fact that is easily seen when the roll of winners of the former Inter City Fairs Cup and UEFA Cup is compared to those that won the European Cup and UCL. 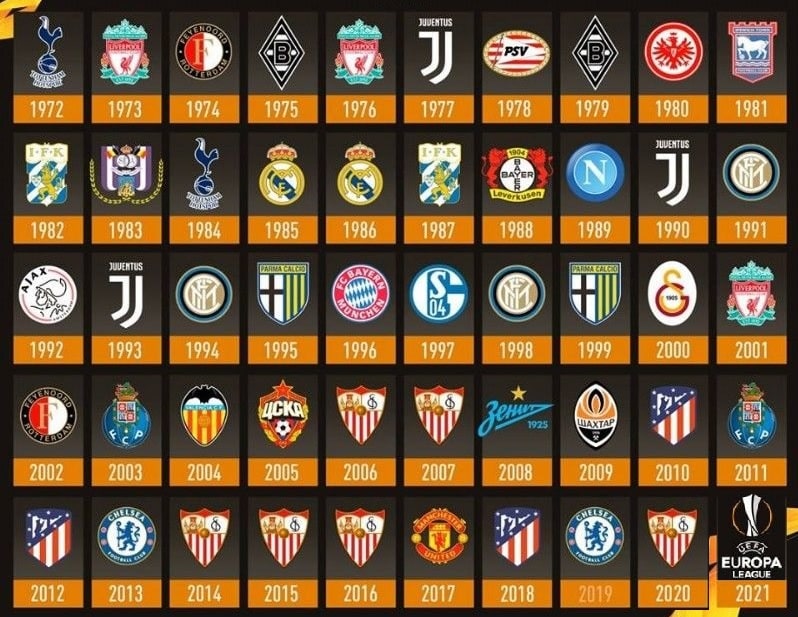