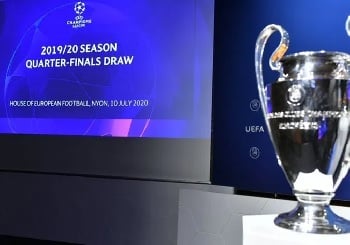 After the let down in the overall quality of Premier League football since the restart let`s hope the truncated UEFA Champions League competition and one-centre venue, Portugal, will produce better fare. Certainly the one-off knock-out element of the quarter and semi-finals should add an air of the kind of cut-throat approach sadly lacking from many of the traditional two-leg ties.

I like many neutrals have been very impressed with the exploits of Atalanta in this season`s UCL and with these two clubs meeting for the first time the Parisian club will do well to not underestimate this seasons `dark horses`.

The Serie A club almost crept up on the rest of us until their stunning Round of 16 victory over European veterans Valencia. The Italian outfit ousted Valencia 8-4 on aggregate, scoring an impressive four goals in each leg. Goals are the order of the day for Gian Piero Gasperini`s men who have also hit three other teams for seven this season.

This could be a goal-fest as neither team is that well equipped at the back and with Atlanta just another word for goal-machine and PSG calling upon Meymar and Mbappe as well as Edinson Cavani . You wouldn`t back against the underdogs from Serie A AND unless PSG can come away from Italy with at least a four-goal cushion you would not bet against Atalanta making it another, `so near yet close` season for PSG.

And if anyone has any doubts about the credibility of Atalanta to be taken seriously at Europe`s top table they currently lie third in Serie A just a single point behind Lazio. Another signpost, to underline their scoring prowess Atalanta have scored TWENTY league goals more than runaway table toppers Juventus. I think I would favour being an Atalanta fan than PSG.

Prediction: A shock for PSG, Atalanta to go through

RB Leipzig continue their progress up the hierarchy of leading European football teams. Just ask Jose Mourinho whose Tottenham team were battered, across both legs, in the last 16. But it’s a given that coach Julian Nagelsmann, who will surely be at an established super-club sooner rather than later, would have preferred not to cross swords with Diego Simeone and Atletico Madrid who must surely one day soon claim Europe`s premier club trophy. This could well be a master class for Simeone to impose on Nagelsmann and both may well benefit from that.

The one-off aspect of the quarter-final ties may just favour Red Bull but in a scrap, by team or coach, who would your money be on. Mine`s on Diego.

Now into the realms of `ifs, buts and maybe`.

Chelsea have little or no chance of overturning Munich`s 3-0 advantage so the best Frank Lampard can hope for is that his young side learn from the tie, overall, and it will benefit them in the years to come.

It`s very likely that Bayern`s opposition will be Barcelona although any side with Dries Mertens in it has a chance of stealing a goal or several. But despite the fact the Belgian scored a `wunder goal` in the first leg Antoine Griezmann`s equaliser gives Messi`s men that crucial away goal.

Forget all the speculation surrounding Griezemann and Lionel. This game is set up for Barca who may have to console themselves with UCL success if they can`t make up the deficit behind Real in la Liga.

Wow. This is the kind of set up that the word `permutation` was coined for.

But the most relieved club in the competition, Manchester City now know they WILL be able to compete in Europe next season with the lifting of the ban that would have excluded them for two seasons. In what was probably no real surprise, did anyone really think one of the most powerful clubs in the world was going to be banned? The reduced 10 million fine is peanuts.

City hold a 2-1 advantage over Real after one of the best results in the club`s history in the first leg. No doubt this is still a close call but with their fire-power, even without Sergio Aguero, I would expect City to outscore Madrid and progress. In a one-off scrap, which is in effect what this is, I would expect the Premier League veterans of the Etihad to triumph.

Prediction: Manchester City to go through

Lyon performed heroically to win the first leg 1-0, against Juventus and that clean sheet could prove crucial. However, that was the first time in 42 matches Juve failed to score and in the six games since they have averaged almost three goals a game, 17. It`s almost a certainty that Juventus will score in Turin.

Depending on the timing of that inevitability it might even make it a more open game. But Lyon, inactive like so many clubs in recent months, may struggle to compete with the quality strength in depth available to the leaders of Serie A. If Lyon do prevail it would see Cristiano Ronaldo`s first exit from the Round of 16 in ten years.