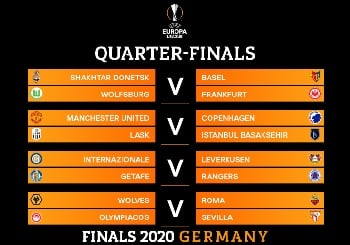 For several reasons Ole Gunna Solsjkaer will be looking forward to this quarter-final tie. After the 5-0 win in the first leg away to LASK the return at Old Trafford is as near a foregone conclusion as is possible. If Manchester United do get through the United boss faces a reunion, whoever he faces.

If it’s the Turkish outfit then he will be up against a player he managed at Mold for several years, Frederik Gulbrandsen and Solskjaer will not underestimate them as he feels they have improved as team over recent times. Their position at the top of the Turkish league, by four points, would tend to underline Ole`s assessment. But if it is Copenhagen he will be locking managerial horns with his good friend Stale Solbakke.

United must be considered one of the favourites to life the trophy with their recent improvement in the Premier League and the top-drawer form of several players, notably Bruno Fernandes and Mason Greenwood.

There will of course be no thoughts about a potential all-English semi-final against Wolves that is a very enticing carrot but what a tie that would be.

Basaksehir should be the team to face United and their star man to keep an eye on is Bosnia international Edin Visca who can cause problems to any defence. More daily predictions can be found here.

Prediction: Manchester United to go through and face Basaksehir

Rangers have a tough task in trying to overturn Leverkusen`s 3-1 advantage from the first leg and if they can achieve Mission Impossible it doesn`t get any easier as they are most likely to face Inter Milan. The Italian giants have a one-off game against Getafe and should go through.

Steven Gerrard`s team has exceeded all expectations with their performances in this competition thus far. They faced a tough draw but edged past Feyenoord, Porto and Young Boys before producing one of the best European comebacks ever in ousting Braga. But the 3-1 deficit to Leverkusen who finished fifth in the Bundesliga to qualify for next season`s UCL anyway, may just be that bridge too far.

Form would suggest that Inter should get past Getafe in what will be a first meeting of the two clubs. Milan have lost just once in their last six games and have a 67% win rate and while Getafe have lost three of their last eight the remaining five were all victories.

Shakhtar must be favourites to get past Wolfsburg because the Ukranian side, UEFA Cup winners in 2009, have a much better current record. They have the better defence out of the two teams and a better win ratio. In the last six games Donetsk have won five and drawn one and scored above 2.3 goals per game. The Bundesliga outfit on the other hand have only scored eight goals in their last six outings and averaged just over a goal a game. They have not only suffered defeat in three of their last six matches but overall lost more than 25% of their last 56.

The Eintracht – Basel clash is a golden opportunity for one of the competitions underdogs to reach the last four. But the Swiss club, with their usual style of open, expansive football, have one foot in the next round already with their 3-0 win in the first leg. Eintracht`s slim hopes lie in their  home record although that may be, ` Am Strohhalm festhaven ` – `clutching at straws`.

Wolverhampton Wanderers earned a tough 1-1 draw away to Olympiacos back in March but have recovered their pre-Covid 19 form since the resumption of the Premier League. The tie against the Greek side is very much still alive but with every game Wolves play their reputation grows as being one of the best footballing teams in the Premier League, with some real quality players in their ranks.

However, the Wolves might have to tap into some Anglos-Saxon steel for what is in effect a one-off challenge night at the Molineux whilst being wary that although they have a priceless away goal they cannot leave themselves open to conceding what would be a most inconvenient away goal to their visitors.

Sevilla and Roma are surely worthy favourites for the Europa League a pity then that one of them will be going on holiday sooner than the other.

Sevilla have won the competition an astonishing five times since 2005 and in much the same way Real Madrid regard the UCL as personal property so to Sevilla regard the Europa League. Roma trail the big four in domestic football by a long way while Sevilla are having a good season domestically are only goal difference from third-placed Atletico Madrid. I think the one-off factor might well favour the Italian club.

Prediction: Roma to go through and face Wolves 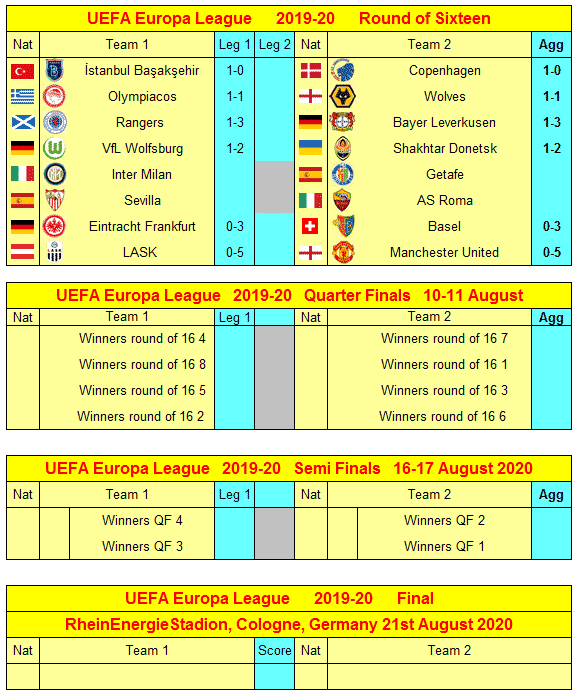