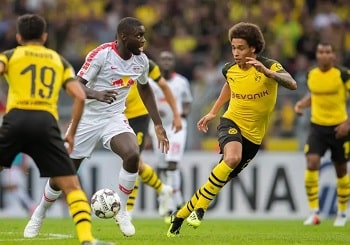 Article: Goals in Store as Leipzig face Dortmund in the Bundesliga

RB Leipzig go head-to-head with Borussia Dortmund on Saturday in a fixture that could have a huge bearing on who finishes second in the Bundesliga.

With Bayern Munich needing to win just one of their final three matches to claim their eighth successive title, their rivals will be left to fight it out for the runners-up spot.

Both sides have winnable looking midweek games, meaning Dortmund should go into the match with their four-point advantage over Leipzig intact.

Read on as we take a closer look at the game and predict who we think will come out on top at the Red Bull Arena.

Leipzig aiming to put home woes behind them

While Leipzig are unbeaten since the resumption of play, three successive home draws have hit their hopes of securing a top two finish.

They also have ended their last two fixtures at home with 10 men on the pitch and will be eager to avoid a similar fate against Dortmund.

Leipzig are favourites in the 888 football betting to win the game and keep their hopes of catching Dortmund for second place alive.

However, they haven’t beaten Dortmund in their last four meetings and are likely to find it tough to snap that streak this weekend.

Haaland the key to Dortmund’s hopes

Erling Braut Haaland’s amazing season continued as he came off the bench to score an injury time winner at Fortuna Dusseldorf over the weekend.

That was the 19-year-old’s 11th league goal in just 12 appearances for Dortmund and highlighted his emergence as one of the most lethal scorers in the Bundesliga.

He will be eager to start against Leipzig on Saturday, particularly with second place in the league likely to be up for grabs.

The way he took his goal against Dusseldorf was simply superb and his presence in the starting line-up will undoubtedly increase Dortmund’s chances of taking something from the game.

Both sides have a point to prove

There was plenty of talk during the recent break in play that Dortmund and Leipzig could mount a sustained title challenge when play resumed.

The reality has proved to be somewhat different, with Bayern winning six games in a row to extend their unbeaten league run to 17 matches.

Dortmund’s 1-0 home defeat against the reigning champions at the end of May effectively ended the title race, leaving them with just the runners-up spot to play for.

Having drawn 11 matches this season it is easy to see why Leipzig’s title hopes have gone up in smoke and both sides have something to prove over the rest of the campaign.

Another thriller on the cards

The two sides fought out a thrilling 3-3 draw in Dortmund earlier in the season and it would be no surprise to see another action-packed affair this weekend.

Julian Weigl and Julian Brandt put Dortmund 2-0 ahead in that game, before Timo Werner bagged a brace to level things up.

Jadon Sancho put Dortmund back in front, but Patrik Schick equalised with 13 minutes remaining to secure a point for Leipzig.

Goals are likely to be the order of the day this weekend and backing over 3.5 to be scored during the game could prove to be profitable. 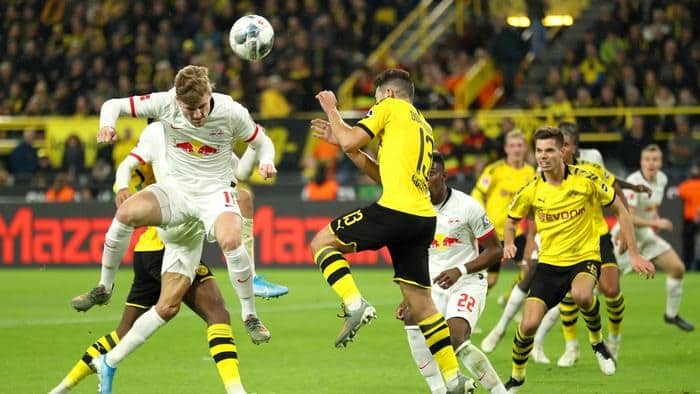