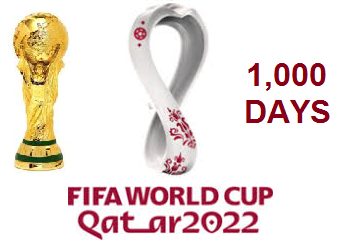 So, there we were preparing to begin ticking off, one day at a time, the 1,000 days to the next World Cup, from May 12th , and all we had to negotiate was:

The first ever winter tournament and questions from major world football organisations, accusations of corruption, human rights issues, political in-fighting and regional jealousies as well as political and economic blockades by air & sea and amazing preparation of stadiums and infrastructure Then, for good measure, along came Covid-19. Do you think the Gods of football`s Olympus are trying to tell us something? But still the show must go on.

To mark the start of the countdown FIFA president Gianni Infantino has begun his PR with a statement.

“With 1,000 days to go Qatar stands where no other host did before. Qatar wants to amaze the world and is on track to achieve it.”

Infantino ramped up the rhetoric by adding.

“The FIFA World Cup 2022 will be a breakthrough from a social and cultural perspective. It will open the doors of this football-mad region, offering a new perspective to locals and foreigners, bringing people together  and serving as a tool for common understanding.”

Already 136 of the 900 qualifying games for 2022 have been played and two of the eight venues are completed ahead of Qatar becoming the smallest country ever to stage the FIFA World Cup Finals as well as the first Muslim country to act as hosts. The tournament will also be a trail-blazer with a time frame reduced to 28 days, finishing on the day of the Final which just happens to be Qatar National Day. It will also be the last tournament to accommodate a 32 nation format as, from 2026, the economic leviathan that is global football has decreed there will be 48 teams in the finals for USA, Canada and Mexico.

Moving the Qatar tournament from its normal summer slot to a first-ever winter finals was fraught with more than enough problems but major tweaking and even more major compromise saw November & December 2022 as the finals resting place. But the Covid-19 pandemic has thrown an almighty big wrench into the works as regards to schedule. The pandemic has robbed world football of three months and, as in the case of Europe specifically, a major international tournament, Euro 2020.

The current season, if you can still call it that, will become summer football, presuming of course that it does restart. That in turn will entail a later close-season then a delayed start to 2020-21 and the knock-on effect that will deliver to the regional tournaments providing the qualification process to decide on the 31 nations to join hosts Qatar in the finals. There is no automatic place in the finals for the current World Champions, France.

The corruption allegations will still not go away but despite fresh allegations surfacing in the USA, this year, but until now 10 years after winning the bid no clear evidence been showed the general consensus is that it would be impossible to move the 2022 World Cup.

Covid-19 has affected the world and in Qatar itself the pandemic has caused the pushing-back of the Amir Cup Final and the national leagues to be put on hold. The proposed inauguration of 2022 World Cup stadia has also been put back and will now be part of the 2020 Club World Cup.

The date for the completion of the Qatar Stars League season will also influence how the national football association plans their next campaign during which the 2022 FIFA World Cup is due to take place, the club competition planned to act as a dress-rehearsal for the World Cup itself. The Qatari authorities have already confirmed that they learned valuable lessons from the last FIFA Club World Cup, held in December last year thus emphasizing the importance of the 2020 cup.

On the flip side the world, let alone the football world, is never going back to what it was pre-Corona and maybe that is no bad thing. Let`s be clear. There are many who feel that football had lost its soul and maybe, post Covid-19 pandemic reflection will give us a better world with an appropriate knock-on effect to the football world.

Remember, football has always been an important part of life for many millions BUT it is still just one part of life, as the pandemic so tragically put into perspective. As football associations and media broadcasters around the globe mulled over potential restarts of domestic and international football among the many considerations and, let`s face it, way down the list in terms of priority was one factor that was under-highlighted.

British Foreign Secretary, Dominic Raab, one of the government ministers who addressed the nation on a daily basis, with a flow of updates, admitted.

“The return of football and wider sport would provide a boost to the nation currently in lockdown.”

If the same boost were provided across the globe to every country and region affected by the Covid-19 pandemic the knock-on effect, 1,000 days down the line would be immense.

For sure, having the World Cup after corona will be a great opportunity for us as humans and fans to have a real joy after too many days without football and in quarantine