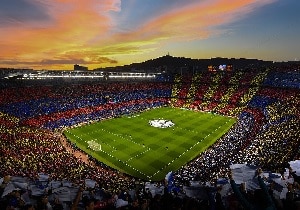 The eight stadiums for the 2022 FIFA World Cup in Qatar are all magnificent designs in their own right and hint at the culture and traditions of the Host Nation, which will be the first in the Middle East to hold the Tournament.

Progress on the stadiums is well underway and ahead of schedule, despite the recent difficulties the Organising Committee has faced. But what of the stadiums which are currently operating?

What constitutes the best, of anything? THE BEST is, dare I say, at best, subjective. But when it comes to deciding which is the best football stadium on Europe, what criteria do you use? Biggest, most expensive to build, tallest, capacity, facilities contained therein, access, parking, communications, the list is almost as long as the number of football clubs that demand they are at least on that list. This guide hopes to answer these questions.

The title of best football stadium is so subjective that you can find dozens of lists showing; the top five stadiums, top 10, top 25 and so on. But, whatever criteria is used, there are some stadiums that figure in every list and from that amalgam I will pick a top one but with the rest being in no particular order of merit.

In terms of capacity the fifth biggest European stadium is the Luzhniki Stadium in Moscow which holds 81,006 spectators. The Estadio Santiago Bernabeu is slightly larger with room for 81,044. The Signal Iduna Park, home of Borussia Dortmund, has a capacity of 81,359 while Wembley sneaks into second place with its 90,000 capacity. The stadium with the highest capacity in Europe is the Camp Nou, home of Barcelona FC.

As far as cost, of construction, goes it is quite surprising that of the top five most expensive stadiums NONE make the top five rated stadiums.

Most costly is the Emirates at 689 million euros, more than a hundred million more expensive than second placed Etihad, at 587 million. Old Trafford is in third place at 460 million euros with Bayern Munich`s Allianz Arena fourth at a cost of 425 million. White Hart Lane comes in at fifth place with a construction cost of 354 million.

Amazingly it is the only list the Tottenham Hotspur Stadium features in when assessing the five top football stadiums in Europe. Mr Levy will not be pleased although it must be said that, in terms of communications, wi-fi connectivity and access, the Spurs ground has to be one of the best in the world, let alone Europe.

Talking of the world, on a list of the top 15 football stadiums across the globe, four of our list of the best five in Europe feature. The odd one out, and further underlining the subjectivity of which is best, is the home of Borussia Dortmund which doesn`t even make the world top 10, creeping in at number 11 despite being much higher in this MFF list. According to this particular list I found Wembley Stadium is the best in the world. Yes, I know it was rebuilt at a huge cost but I think that history and nostalgia has more to do with it being number one than any of the other criterion used to compile our list.

One stadium that didn`t make it onto our top five list is Anfield, but it has to get an honourable mention as it is, arguably, recognised as the best stadium for perhaps the most subjective of criteria, atmosphere. Impossible to quantify but palpable when you are there with 54,000 others almost proving the old expression of the crowd being the 12th man. Anfield`s atmosphere is also important because it connects to a stadium that does make the top five, indeed it is number two, remembering that after the number one, revealed later, it is a list in no order of merit.

The Signal Iduna Park – Westfalenstadion – home of Borussia Dortmund. Built for the 1974 World Cup the ground was, until the late 1990s, relatively unremarkable with a 50,000 capacity. But in the wake of Dortmund`s Champions` League success in 1997 a process of expansion began which transformed the place.

Most notable was the development of the South Stand Terrace, the largest terrace in European football, with a capacity of 24,454. Incredibly the standing area can be converted to seats for international and European games although that reduces capacity. The `Yellow Wall` as it is known is seen as a celebration of the passion football can inspire.

Old Trafford is another top stadium that does not make our top five although on the world list I mentioned earlier it ranked number three. The San Siro does make our top five and I wonder how well-known is the fact that wherever one might sit, at the joint home of Inter and AC Milan, every single one of the 80,018 spectators capacity can see the pitch, regardless of position, with maximum visibility, no restrictive views in Milan. If you fancy a bet on either of the Milan Clubs, this promo code will come in very useful.

Real Madrid`s Estadio Santiago Bernabeu has the fourth biggest capacity in European football and its towering stands climb towards the heavens, matching the unequalled success the team has had in the European Cup and UCL subsequently. If you ever get the chance to sit in the top tier of the main stand for a European game, please remember to take binoculars.

Splitting the Bernabeu and the top football stadium in Europe, is the Signal Iduna Park Stadium in Dortmund, and that top stadium is, no drum roll, please, the Camp Nou, home of Lionel Messi and Barcelona FC.

The Camp Nou was given a 5 Star rating  by UEFA back in 1998-99 just in time for one of the greatest Champions` League Finals of all time, Manchester United`s amazing comeback to beat Bayern Munich. The stadium features in just about every list when it comes to trying to determine the best football stadiums in Europe and tops many of them.

It holds nearly 10,000 more spectators than the second largest capacity, Wembley, with room for 99,354 and has an atmosphere like Anfield, Iduna Park and the Bernabeu. And no one can argue its cathedral-like presence on a floodlit match night, heaving to full-capacity. Even watching on television you can almost touch the Nou Camp and its special atmosphere.

The Top Five Football Stadiums in Europe are: