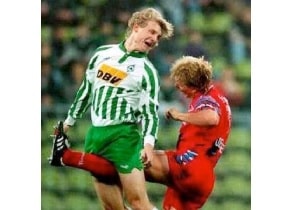 Article: You Couldn`t Make It Up – Bizarre Football Injuries

While the world and sport reels from the corona pandemic it is perhaps an opportune time to reflect on other instances where footballers could not ply their trade, for the most bizarre reasons. Injuries are part and parcel of sport, particularly contact sport, and are accepted as such but football history is punctuated by examples of professional players who have, shall we say, gone beyond the pail and ended up on the treatment table by totally avoidable events. Bookmakers should have taken a bet on these injuries.

A quick search of the archives not to mention my personal memory banks and I’ve come up with some crackers. Although injury is no laughing matter there are more than a few bizarre injuries that stand out and, is it a coincidence that more than what might be considered the average were suffered by goalkeepers.

At one time Dave Beasant, he of the `Crazy Gang` was the way out king of bizarre injuries for an instance that occurred when he was at Chelsea.

Dave, an England international goalkeeper, suffered an injury which is almost beyond explanation, in 1993. Feeling a bit peckish Dave went to the fridge and promptly dropped a two kilo jar of mayonnaise on his foot.

The jar shattered and severed a tendon in his big toe and he had to miss several games for his club.

Michael Stensgaard was a highly regarded Danish Under 21 goalkeeper who was lauded as the heir-apparent to Peter Schmeichel in the national team. He signed for Liverpool in the 1990s but his promising career was ended by a freak injury in the most bizarre of circumstances at his Southport home. Michael was reaching for one of those pull-down ironing boards when he injured his shoulder. Quite naturally he took a bit of stick from his team mates but it wasn’t as straight forward as that.

It seems that the `keeper had actually injured his shoulder in training and was in the process of rebuilding the muscle but reaching for the ironing board simply put too much strain on an already weakened shoulder and out went the joint. Repeat dislocation of that particular joint is never good news for a goalkeeper and Michael eventually had to retire.

Completing a trio of calamitous custodians is Lionel Letizi. The Paris St Germain goalie was injured, in 2002, PLAYING SCRABBLE. It seems Lionel was reaching for a letter he had dropped and in doing so pulled a muscle in his back. Worse was to befall yet another goalkeeper. Are they unlucky or what?

It was also 2002 when Spanish international Santiago Canizares missed the World Cup finals after he severed a tendon in the big toe of his right foot after dropping a bottle of aftershave which shattered and a shard of glass penetrated his skin. Closer to home, Arsenal and England goalkeeper David Seaman required surgery after he pulled a muscle while reaching for the remote control to record Coronation Street.

Moving away from those unfortunate members of the Goalkeepers` Union who suffered more than their fair share of misfortune and on to Aston Villa striker Darius Vassell. In 2003 Darius must have come to a point when he was grateful he decided to follow a career in football rather than pursue a career in medicine. It seems he wanted to try and drain a blood-blister on his foot, WITH A POWER DRILL. Unfortunately he subsequently had to have a portion of his nail removed, by a qualified practitioner, thus underlining the correct decision to be a professional footballer and not a surgeon.

While he was a Leeds United player Rio Ferdinand managed to strain a tendon in his knee, playing Pro Evo. It seems he spent too much time with his leg resting on a coffee table and suffered as a consequence. Another defender, Alan Wright really suffered for his art. The Aston Villa full back once bought himself a Ferrari but only managed to sprain his knee when reaching for the accelerator pedal.

Midfielder Adam Chapman, while on loan at Mansfield, had to go to hospital because he burned his nipple, with baby milk. Chris Wilder, his manager at the time, was quoted as saying;

“Adam was making his baby some milk. He then shook the bottle up and down but unfortunately he hadn’t put the top back on properly and spilled hot milk on himself. He went to hospital for a check up with a burnt nipple as the consequence.”

I did write earlier that Dave Beasant was the king of bizarre injuries but he lost his crown to Svein Grondalen. Svein was a Norwegian international, hard man and feared tackler. He was capped 77 times by his country. It would have been 78 and a new Norwegian record caps tally  but he had to miss that game, a World Cup qualifier, due to THE BEST TRAINING INJURY EXCUSE/REASON OF ALL TIME.

Apparently Svein telephoned his international manager to inform him he would be unable to attend the game. Naturally the coach asked him how the injury occurred. Sven replied.

“I was out on a morning training run, though the forest, and ran into a stray moose.”