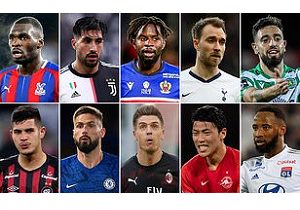 The two significant factors of the transfer window which kicked off a new decade were; a singular lack of activity and a worrying, growing trend that underlined the biggest deal of the window, Bruno Fernandes` move to beleaguered Manchester United – yes, I didn`t think I would ever write those words about United.

The club completed the deal despite a potential last-minute attempt to hijack the deal by Barcelona, maybe. It seems the player had the choice of joining Barca and immediately going out on loan to Valencia or Old Trafford where he was almost certain to go straight into the team. The worry is that so many people thought it was  a ploy by Bruno`s agent to hike the fee, if that was the case, it worked.

United increased their bid, twice, eventually settling at, with add ons, a staggering £68 million. Disinformation, suggestion that another club is interested, because it was Manchester United, or any of the big clubs, designed to inflate the fee, is a worry. From the sublime to, well, the other extreme. Go on, how many people remember United`s deadline day acquisition, Odion Ighalo, yes, exactly, not many.

Possibly because he`s been in China with Shanghai Shenhua from where he joins United, on a six-month loan deal, WITH NO OPTION TO BUY. That one smacks of a panic buy if ever there was one. But let`s not forget one young man, Ighalo is 30 by the way, Nathan Bishop, a 20 year old goalkeeper who goes to Old Trafford from Southend.

The other aspect of the transfer window, and I sincerely wonder how much longer we will have a January window, perhaps explains the lack of activity when compared with the past. Most sane people regard signing players in mid-season as `panic buying` except in the case of injuries.

And those clubs are predominantly the ones fighting to avoid relegation. Who wants to join a relegation fight, if you are a player, and what club is desperate to risk paying Premier League wages, in the Championship. There were a less than expected number of permanent deals done but loan deals seemed to take centre stage, I suppose that removes or reduces the risk-element, as alluded to previously.

Arsenal completed one such deal to bring Cedric Soares in from Southampton. The Portuguese international right-back will be at the Emirates until the end of the season. Southampton made their own loan signing by making an excellent choice in Kyle Walker-Peters, the Spurs player with immense potential.

Up to the final day of the window there were not many big Premier League signings. The second biggest deal, behind Fernandes, was Spurs making the loan signing of Real Betis midfielder Giovani lo Celso permanent for a fee of £27.2m. Tottenham also added forward Steven Bergwijn for £27m from PSV Eindhoven, after selling Christian Eriksen to Inter Milan for £16.9m, what a bargain for Inter by the way. Just watch the Dane flourish in Serie A.

Spurs were central to final day transfer activity and speculation, mainly the latter with Olivier Giroud looking more likely for WHL than a late punt, we were led to believe, for former Tottenham player, Gareth Bale, though the Welshman`s Galactico wages were the major stumbling block. In the end neither player made any kind of move.

Leicester, along with Spurs and Chelsea, are pushing for the Champions` League slots in the Premier League campaign but Brendan Rogers has made a pragmatic signing. Ryan Bennett, albeit on loan, comes in from Wolves as cover for The Foxes superb central defence axis of Jonny Evans and Caglar Soyuncu.

The irony of Chelsea`s lack of acquisitions in January was them actually being able to make signings with the ending of their transfer embargo.

Wolves spent a reported £16.9m on Portuguese winger Daniel Podence from Olympiakos and with the highly successful recruitment policy demonstrated by Nuno Espirito Santo, over the past two seasons which has made Wolves, arguably, one of the most watchable teams in the Premier League, surely things can only get better.

The canny Wolves boss also delved into the lower leagues to sign one for the future, Luke Matheson, though the way the 17 year old schoolboy has been playing for Rochdale this season, him being returned to the Lancashire club on loan may only be delaying a Premier League bow.

Poor old Newcastle struggled to strengthen their squad, maybe the spectre of what`s going on with Mike Ashley, `will he wont he, when, will he sell` has put off potential targets. They did however manage to make Danny Rose a loan signing, maybe that will put a smile back on the face of someone who, very recently, was almost a first choice as England left back.

Burnley have added Josh Brownhill to their roster, the Bristol City midfielder going to Turf Moor for £9 million. Nahki Wells makes the opposite journey for £5 million. Meanwhile Brighton made a loan deal for one of the most underrated players in the top flight, Aaron Mooy, permanent. They also signed 19 year old defender Tariq Lamptey from Chelsea as Graham Potter appears to be making a good fist of keeping the Seagulls in the Premier League.

West Ham keep sticking their collective finger in the dyke, on an annual basis, in their regular fight to stay in the Premier League. This window they managed to finally get the deal complete to bring Jarrod Bowen in from Hull. The striker, who has scored 16 goals in the Championship this season – that may come in useful, next season- joins the Hammers on a five and a half year contract.

He may prove a useful acquisition as he can fill a number of roles, notably as a winger or central striker. David Moyes has also recruited, again a loan deal, defensive midfielder Tomas Soucek from Slavia Prague.

But I have to say that my personal favourite deal of the entire transfer window is  Sheffield United signing Jack Rodwell. You might call it `The Lazarus Effect` because Chris Wilder has brought the former England international back from the dead when he must have been thinking the football world forgot about him. Still only 28 he will bring plenty to The Blades` push for European football.

Oh, I nearly forgot, Liverpool. Jurgen Klopp took time off from monopolising the Premier League title race to sign Joe Hardy, from Brentford. The 21 year old striker, from Wirral, just over the water from Liverpool, has a phenomenal scoring rate for Brentford`s B side, of exactly one goal every two games, 40 in 80 to be precise. I can`t wait to see him in the first team. What a natural goal-scorer can bring to that team can only be drooled over.