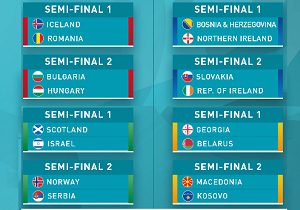 Before we can savour the delights of the latter stages of Euro 2020 being on home soil there are some interesting sub-plots ahead with the series of play-offs that give 16 nations a second bite at qualification for the finals.

Most intriguing of all, if you can look behind a series of `ifs, ands, buts and maybes` is presented by Pathway B.

Bosnia Herzegovina play Northern Ireland while the Republic of Ireland are matched with Slovakia. If the two Ireland`s can triumph then we would have an All-Ireland Final in Belfast. The two countries have not met in a competitive game since the 1-1 draw in the qualifiers for Euro 96, at Lansdowne Road in March 1995.

The Republic could have reached Euro 2020 automatically had they beaten Denmark but for the men from the Emerald Isle- south- it was failure at the final hurdle, again. Slovakia also went mighty close and only failed by a single point to qualify. Mick McCarthy`s team face a useful Slovakia which will not be easy.

Northern Ireland will welcome back manager Michael O`Neill from his day job at Stoke City and should negotiate safe passage. Bosnia struggled in qualification and only managed the safety net of the play-offs due to their victories over perennial whipping boys like Liechtenstein, 5-0 and 3-0, although they did show their mettle with a 4-1 win over Finland.

PREDICTION: All-Ireland Final with the Republic to triumph

Since their purple patch in reaching the quarter-finals of Euro 2016 and qualifying for the 2018 World Cup Iceland`s form has dropped. Romania, bolstered by the emergence of  Ianis Hagi, son of THE Hagi, Gheorge, currently on loan at Rangers, must fancy their chances of getting through.

Bulgaria is probably the weakest team in the group and it wasn`t until their final group game against an already qualified Czech Republic that they managed to register a win. Hungary on the other hand finished just two points behind second placed Wales so should beat Bulgaria.

This is a tough one to call but I think Hungary will progress.

Serbia have made good showings in recent World Cups but have failed in their last four European Championship campaigns.  Their qualifying campaign this time around imploded dramatically after their 5-0 defeat by Ukraine but they are still probably the strongest team in this group with Ballon d`Or nominee, Dusan Tadic, and Lazio playmaker Milinkovic in their ranks.

Tadic had been reborn since his move from Southampton  to Ajax and has an immense scoring record for the Dutch side of 51 goals in 90 appearances. But Norway will be no pushovers with the Oslo game likely to be a particularly tough encounter as the Norwegians have not lost at home since 2016. And their only qualifying defeat was a narrow 2-1 loss to Spain. Serbia will also be fully aware that Norway never say never and often come back into games with a late surge. Three times they rescued a point in injury time.

Scotland oh Scotland, which team will turn up for their games against Israel? The team that beat the Israeli`s 3-2 or the one that has struggled against the likes of San Marino. I think the final qualifying table perfectly sums up the Jekyll and Hyde persona that is the Scotland national football team; Played 10, won 5 lost 5. Enough said.

I think Scottish character will come to the fore and that they and Norway will slug it out to get through. After that, I have a hunch for Norway.

None of the teams in this group has ever qualified for the European Championships as an independent nation although Kosovo and Northern Macedonia came close by finishing third in their respective groups.

This is the group I think will provide the final qualifier for Euro 2020 and at the outset let me state my inkling that it will be Kosovo. They are currently rated at 114 in the world by the wonderfully accurate FIFA rankings but they are far better than that. The reason they have such a low ranking is that they have only been playing international football, officially, for three years. Kosovo took the Czech Republic to the final round of qualifying matches and were also the first team since 2012 to score three goals away to England.

I watched a lot of the qualifying games for Euro 2020 and of all the teams I saw, patriotic feelings aside for England, the side I was most impressed by was Kosovo. They have an almost perfect blend of technical skill and drive and seem able to switch from one to the other, collectively, better than any side I have seen for years, Indeed they remind me so much of Croatia when they began their ascendancy and they haven`t done so bad have they.

Georgia head coach Vladimir Weiss once took Slovakia to the knock-out rounds of the World Cup and recent draws against Denmark, Ireland and South Korea would make them favourites to beat Belarus who only picked up four qualifying points.

PREDICTION: Kosovo, to not only reach Euro 2020 but to be the surprise package in the summer. 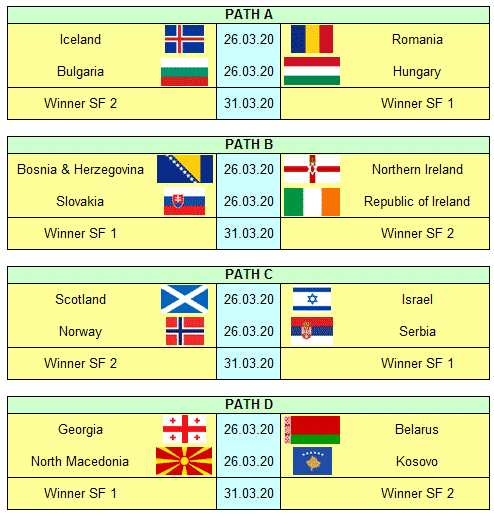