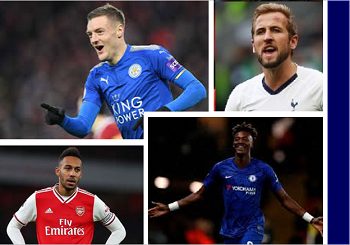 Premier League Top Scorers 2019-20 till Matchday 17 are Jamie Vardy from Leicester with 16 goals, Tammy Abraham from Chelsea with 11 goals, Pierre-Emerick Aubameyang from Arsenal with 11 goals and Marcus Rashford from Manchester City with 10 goals. Amazingly, Harry Kane from Tottenham Hotspur has the best Games per Goal Record at 1.43.

Tottenham Hotspur player Harry Kane may catch up as a Top Scorer with Jose Mourinho as the new manager who showed an 80% record win so far.  We have an interesting match installed with Spurs playing against Chelsea in the upcoming Matchday 18 game on Sunday 22/12/19.

The Golden Boot Award contenders are still in the race.

Keep up to date with Myfootballfacts compilation of goal statistics.

Premier League Goalscorers for Each Season