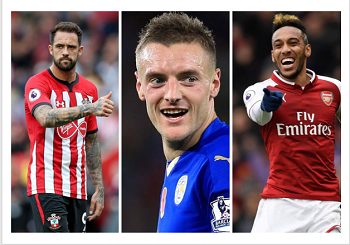 Another exciting Premier League campaign is on course, and in the build-up of the Boxing Day clashes, Liverpool has a decent advantage over the second-placed Leicester City. On the individual plan, many players are chasing the top scorer award and we are going to take a look at the current standings on that parameter. We have therefore asked betting tips expert John Pentin from leading UK site Betting Tips 4 You his view on how this will pan out.

After 20 rounds played so far, seven players have scored 11 or more times during the season. However, one name stands out of the crowd as Jamie Vardy is sitting on the top of the table since he managed to find the back of the net 17 times so far. Taking into consideration that he booked all 20 appearances in the campaign, he has been scoring almost a goal per match in average and that confirms his great form at the moment. Vardy has been voted for Player of the Month award in October, and during that month he bagged four goals in three EPL appearances. During Leicester City’s winning streak which lasted for eight straight games in the Premier League, Jamie Vardy managed to score in each of those matches. The Foxes are currently sitting on the 2nd spot, mostly because of Vardy’s excellent form, and if he manages to keep up, he might pick up a Top Scorer award at the end of the season, since he is six goals ahead of the closest contenders.

Three players who scored 12 times this season are following Vardy in the top scorer race. Pierre Aubameyang is also one of the names among the top scorers as he managed to find the back of the net 12 times in 19 appearances. He was voted a Player of the Month award for September thanks to five goals scored in four Premier League rounds. However, Aubameyang has been searching for a goal in the past two matches in which entire Arsenal team failed to score. The Gunners’ fans cannot be happy with their team’s form lately and Pierre could turn their luck around with another scoring spree. If he managed to accomplish that, Aubameyang will remain in the race for the top scorer this season.

One name which popped up unexpectedly is Danny Ings. Southampton forward is the third player in the group of ones who scored 12 goals so far. Although his start of the campaign wasn’t promising, he entered an excellent streak after scoring twice in the EFL Cup match against Portsmouth at the end of September. Following that game, Ings bagged three goals in the next three EPL rounds. After missing to score three games in a row, he managed to pick up where he left off with another streak, which lasted a little bit longer this time. Ings managed to put his name on the scorers’ list five times in a row, while in the latest round he scored a brace away to Aston Villa. Since Southampton is struggling in the relegation battle and teams’ attacking potential is not as high as of the top teams, it is hard to expect that Ings will manage to challenge the top spot of the scorers list.

Marcus Rashford is the last one to have scored at least 12 goals this season. He had a pretty poor start of the campaign on the individual plan, but Marcus managed to find a good form and catch up top scorers on this season’s list. Rashford managed to score at least once in six games out of the last ten Premier League rounds. Although he didn’t have a notable streak in the Premier League, he should be able to remain in the top of the scorers’ list. However, Marcus needs to be supported by his teammates and Manchester United is not putting constantly good displays this season, which affects Rashford’s efficiency.

Some of big names who managed to surpass the magic number of ten goals are pretty close and are still not without the chance to get involved in the race. Harry Kane, Tammy Abraham and Raheem Sterling have found the back of the oppositions’ net eleven times so far in the season. With a good streak, one of them could get closer to Vardy, there is a lot of dynamite in their legs, so we can expect an interesting battle on this list.

Let’s take a look what the bookies are saying. Naturally, Jamie Vardy is the top favourite for the award, and you can expect to get evens odds if you decide to put money on him. Harry Kane and Mohamed Salah are considered as Vardy’s main challengers, and both of them are priced at 7/1. You can get the odds of 10/1 if your pick is in the Aubameyang-Abraham-Mane group. Sterling is priced at 12/1, while the highest odds are offered if Sergio Aguero claims the award – 14/1.

In any case, the top scorer race is going to be as interesting as the title battle in the Premier League this season.

Premier League Goalscorers for Each Season