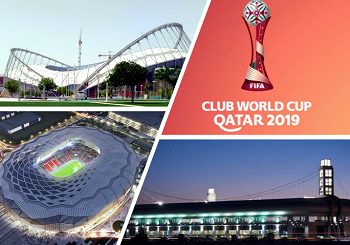 Alibaba Cloud will represent the 2019 FIFA Club World Cup. It will feature top teams from different continental confederations and Qatar’s soccer league champions. Qatar will host the international club tournament from 11th to 21st December 2019. The teams will compete in three stadiums. You can place stakes on any club on Betway. Read on to learn more about the Club World Cup.

In 2017, FIFA proposed to expand the Club World Cup to feature 24 teams. It delayed announcing the host nation of this year’s tournament. The football body announced on 15th March 2019 that Qatar would host the 2019 and 2020 Club World Cups. The tournaments will test its ability to host the 2022 FIFA World Cup.

So far CF Monterrey, Heinghene, Liverpool FC, Es Tunis, and Al Sadd Sports Club have confirmed that they will take part in the competition. The AFC Champions League and CONMEBOL Libertadores winners will be selected later this month.

Where will the matches be played?

The 2019 Club World Cup teams will compete in the following stadiums:

The stadium will open on Qatar National Day. It will host the Club World Cup semi-final and final. Also, Liverpool FC’s opening game will be played at the Education City Stadium. They will face the winners of the second match in the semi-final stage. Visit http://www.th-footballfans.net  to get the latest Club World Cup match updates. It can accommodate 40,000 spectators. Moreover, the City Stadium will host certain games during the 2022 FIFA World Cup.

Locals nicknamed the stadium as the Diamond in the Desert. It has triangles that create unique diamond-shaped patterns that change color as the sun shifts. Its intricate design displays Islamic architecture.

The stadium will host the fifth-place game in the FIFA World Cup. The semi-final game between the Match 3 winner and CONMEBOL Libertadores winners will take place in the Khalifa International Stadium. It is one of the most prestigious soccer stadiums in the Asian country since wit was constructed in 1976. It has a capacity of 40,000 seats.

The 2019 FIFA Club World Cup opener will be held at the Jassim Bin Hamad Stadium. It will also host the second and third matches. Al Sadd SC is the winner of the Qatar Stars League. It earned them automatic qualification into the World Cup. They will compete with Hienghene Sport on 11 December 2019. The stadium can accommodate 12,000 spectators.

The Federation Internationale de Football Association (FIFA) organizes the FIFA World Cup each year. This year’s tournament will be the 16th edition of the Club World Cup. Although the club tournament isn’t as prestigious as the FIFA World Cup, South American clubs value it a lot. It will feature top clubs such as CF Monterrey, Al Sadd Sports Club, and Liverpool FC. You can bet on them on Betway.