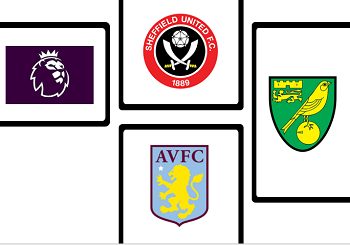 Article: EPL – A Look at the Performance of Promoted Clubs

The English Premier League is at its full swing. After the completion of 9 rounds, the defending champions Liverpool are comfortable placed at the top of the points table. They are still undefeated in the tournament and are dominance is as evident as empire777 supremacy in the Asian region.

However, there are other 19 teams in the tournament as well and they are competing with each other to improve their standings in the points table. The three promoted clubs Sheffield United, Norwich City and Aston Villa too have got mixed bag results in the tournament this far. In this article, we are going to have a look at a glance at English Premier tournament with special reference to the performance of these three promoted clubs. So let’s get started with our statistics and analysis.

As on 23rd October 2019, each team has played nine matches. As expected, Liverpool are comfortably heading the points t with 25 points. They have won 8 matches and drawn one with no losses thus far. They have a comfortable lead on their closest rival Manchester City which has 19 points. Leicester City and Chelsea occupy the third and fourth position with 17 points each, but Leicester City being third because of a better goal difference. So all in all Liverpool, seems to have a comfortable lead with a tough competition for the second spot with only two points separating this Manchester City, Leicester City and Chelsea.

As far is the story of the three promoted goes on, Sheffield United seems to be in the best position ranked 8th in the points table. They have played 9 matches thus far, won 3, drawn 3 and lost 3 as well. They have scored 8 goals and faced 7 and have a total of 12 points. Their performance in the last two matches has been good and they have been consistently improving themselves with every match. They are expected to fetch better results and move further ahead in the points table in the coming days.

As far as Aston Villa is concerned, they too have performed decently and are placed at twelfth position at the moment. In their nine matches they have 3 lost 4 and drawn 2. They have scored 15 goals and 13 goals have been scored against them with the positive goal difference of two. However, their performance has not been up to the mark the last few matches. They are not been able to score victories in the last three matches. Some of the matches that it should have won or have chances of winning have been drawn and this has caused them dearly. They need to improve in future and they can do that for sure.

The third and the final promoted club Norwich City is finding a very tough going ahead in EPL. In their nine matches they have just been able to win 2, dream 1 and lost 6 matches. Their defense has been very vulnerable with 21 scores have scored against them. Their forwards have been equally disappointing with just able to score 10 goals in nine games. They have been consistently losing matches, however, they won their last match and that could be a relief for them. If they want to improve their standings in the points table, then they would really need to work on almost all departments of the games, especially defense.

As far as the individual performance of the players are concerned, Teemu Pukki of Norwich City is ranked among one of the top goal scorers of the tournament with 6 goals in his Kitty, yet, he seems to be a lone runner in the team of 11 and his goals have not really been able to win matches for Norwich City. He has a good assist in form of Emi Buendia, however, their defense have disappointed them greatly. If they really want to pick up in the tournament then they have to work on their defense for sure.

On the other hand, though Sheffield United and Aston Villa do not boast of any leading goal scorer in the tournament, but they have collectively been able to perform well as a team and therefore they standing is better than or Norwich City, which despite some good individual performances, have failed to pick up in the points table.

At the end of the day, football is all about team game and management, and if you can learn how to use all of you playing 11 as well as substitutes in the right manner, and play with the right team spirit, then you can expect better results. Norwich city needs to understand this and work on this department.

So here was a quick update on the EPL. The tournament is still not over yet and it’s a long way to go before deciding would ultimately pick up the trophy. However, if stats and history is to be believed, it seems that Liverpool are not likely to get any serious competition at this level. That being said, you can never really predict the winner till the final match and let us hope that  EPL too, gives us seem exciting and unpredictable finish with some of the closest rivals Chelsea, Manchester City and Leicester City challenging Liverpool to the last. Let us know what you think about this?

Your suggestions and feedback are valuable for us. They tell us about our power plus and minus and helps us in improving and improvising on our content. Therefore, we request you to please take out sometime to let us know your opinion about this article. Do also tell us your feedback on this article. If you like to add any other information or you like to let us know your opinion, simply feel free to leave a comment for us in the comments section. We greatly appreciate the time you spend reading this article does for.