There were goals aplenty and one or two surprises as the 2nd Round of the Asian Qualification Competition for the Qatar 2022 World Cup got underway earlier this month. The winners of each of the eight groups will qualify to be joined by the 4 best runners-up.

Maldives began well with a 1-0 win away to Guam but it was Syria who took the initial plaudits with a 5-2 victory in the Philippines but the Philippines bounced back by beating Guam 4-1, in Guam. Then the might that is the PR China, a nation planning 50,000 soccer schools, went to the idyllic Maldives and shattered that idyll with a resounding 5-0 win.

Even at this early stage, before each team plays its third game its looking almost certain that Syria and China will contest the top spot and progress to Round 3.

Australia are strong favourites to top this group and they made a fine start to their campaign. After Kuwait won their opener 7-0 at home to Nepal they might have expected a bit more out of their home clash with The Socceroos but it was the team from Down Under that came away with a 3-0 victory thanks to a couple of goals from skipper Matthew Leckie and another from Aaron Mooy.

Nepal also bounced back, after their drubbing in Kuwait, when they triumphed 2-0 away to Chinese Taipei to give new coach Yohan Kalin his first victory.

Australia should win the group.

Iran and Bahrain began their quest to reach Qatar with opening wins in Group C. Iran won 2-0 in Hong Kong despite wanting the game moved because of the civil unrest in Hong Kong. Bahrain won 1-0 in Cambodia to put themselves and Iran two points clear of their beaten opponents who could only manage a 1-1 draw when they met in Phnom Penh.

Iran and Bahrain are in the driving seat to win the group but watch out for Iraq.

Iran should top the group

This is really looking the most open of groups with teams taking points from each other so there is no clear cut favourite.

Palestine began by beating Uzbekistan 2-0 while Singapore and Yemen played out a 2-2 draw, on September 5th. Five days later Singapore moved ahead of Palestine by beating them 2-1 while Yemen surprisingly held Saudi Arabia 2-2. If Yemen get a win over Uzbekistan in October they may just start to believe they can impact the top of the group.

Hosts for FIFA 2022 Qatar made a flying start by beating Afghanistan 6-0 while Oman were winning 1-0 in India but five days later, on September 10th it was almost a different universe when Qatar were held 0-0 at home by India as Afghanistan were winning 1-0 at home to Bangladesh. Qatar at home to Oman in October should go a long way to deciding the eventual group winner.

Tajikistan, yes I had to look it up as well, are the surprise package thus far in the early stages of qualification from the Asian Qualification Competition. Having just celebrated only its 28th anniversary as a nation the national team sits proudly at the top of this group with two wins out of two. After a 1-0 win over Kyrgyzstan The Crowns followed up on September 10th, the day after their national anniversary, by winning 1-0 in Mongolia. Japan, as expected, beat Myanmar but only 2-0. Personally I can`t wait for October 19th when Japan make the 6,000 kilometre flight to Dushanbe for what could be a group decider.

The two favoured teams in this group are Malaysia and the UAE and both began their quest for Qatar with a win. Malaysia claimed a close victory away to Indonesia, 3-2, but then fell to a 2-1 home defeat at the hands of UAE.

Thailand and Vietnam complete the group and they played out a goalless draw in their first game.

If I have to pick one team to end up as group winners it would have to be UAE.

South Korea stand head and shoulders above the rest of this group and started their campaign with a 1-0 win in Turkmenistan on the same day North Korea won 1-0 in Sri Lanka. The only problem for Song Heung-Min`s team is that their North Korean neighbours had already picked up a

Matchday 1 win, at home to Lebanon, 2-0. It makes the Korean derby on October 15th a `must not miss at all costs` game of football. A win for the North would almost certainly oust the South but a win for South Korea would mean all to play for.

I`m going to sit on the fence for this one but if stood against a wall and having to go one way or the other I would go South. 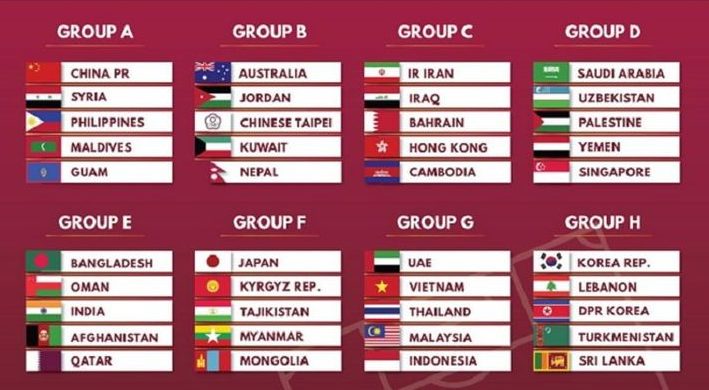