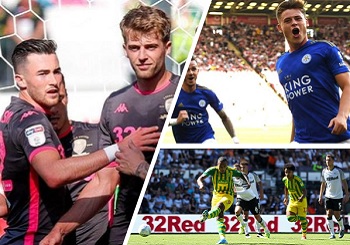 Marching on to the Title? Box office Leeds Chase the Premier League Dream

The makers of the new Amazon Prime documentary surely couldn’t believe their luck when they chronicled the ups and downs of Leeds United in 2018/19. Take Me Home couldn’t have scripted it much better if they’d tried – from the influence of the mastermind Marcelo Bielsa to the thrilling play-off push and the incredible ‘spygate’ saga, the Yorkshire sleeping giant were box office.

Yet – spoiler alert – the story ended in heartbreak. Leeds let promotion slip through their fingertips and were pipped to the post for an automatic spot by rivals Sheffield United, before losing a dramatic play-off semi-final to Derby County, the club that caught Leeds snooping on their training sessions earlier in the season.

For non-fans, the ending merely adds to the drama. For Bielsa and the Elland Road faithful, there’s a determination to ensure that isn’t the ending of this story – just the end of the beginning.

The early signs for the next chapter have been good, with three wins in the first four games of the season and just two goals conceded. The club has also managed its financial affairs astutely when preparing for this season. Big fees have been brought in for Kemar Roofe, Bailey Peacock-Farrell and the out of favour Pontus Jansson as well as for Jack Clarke, who returns straight away on loan after a transfer to Tottenham. The loan captures of Jack Harrison, Helder Costa and Eddie Nketiah should ensure that the quality doesn’t dip – and that the club steers clear of the dreaded Financial Fair Play rules that cause headaches for most second tier chairmen.

Yet the Championship is anything but predictable and Leeds are not going to have everything their own way, even if their squad looks strong. It helps not having a club the size of Aston Villa or Newcastle to compete with – but the league is littered with fallen giants who have eyes on the same prize. Sheffield Wednesday, Nottingham Forest and Derby County all want to end long stays away from the Premier League, while West Brom, Fulham, Cardiff, Middlesbrough and Swansea are among those with a more recent Premier League past who want to return. There are plenty of clubs with a big budget and big dreams who will fail to overcome the challenge ahead.

Teams will definitely have a plan ready to combat Bielsa’s side – and a dogged display by Forest to earn a 1-1 draw at Elland Road could be a blueprint of what’s to come. Yet you’d back the bucket-perching Argentine innovator to have a clever idea or two to overcome the resistance. Plus, while the cliché suggests players burn out under Bielsa, there’s every chance that the squad will benefit from having had a full season of training under the former Chile boss. Norwich, for example, certainly looked a stronger outfit in the second season of the Daniel Farke revolution and too few Championship clubs allow a manager’s vision to come to fruition before wielding the axe.

Leeds might do well to spend another season perfecting Bielsa-ball too. Sheffield United, Norwich and Aston Villa are all among the favourites to come straight back down with William Hill, showing the scale of the gap between the two divisions. The Premier League is not somewhere to go to if you’re not ready.

If Leeds can succeed where they failed last time around – and return to the Premier League 16 years after they were relegated – you suspect the cameras will have plenty more good material in the can for a follow up.