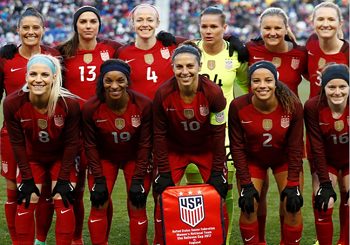 Women’s football has been on the radar lately as we are currently midway through the FIFA Women’s World Cup. It doesn’t really matter which teams are playing, at World Cup level you do not expect to be witnessing a score of 13-0, but that is precisely what happened when the USA met Thailand, in what has been dubbed the biggest victory ever as bets.co.za reports.

The USA who won the World Cup in 2015 and have brought another strong side to the contest this year and managed to be 3-0 up when the half-time whistle blew. At this point, there was nothing that unusual, as these are scores we see all time, and Thailand knew that they had their work cut out in the second half if they were to gain any ground. On paper, the USA team is the stronger team, but when they returned to the pitch and scored a further ten goals in the second half, it is fair to say their supporters were on their feet while the Thailand fans could only look on in shock and disbelief.

The previous recorded biggest win was when Germany thrashed Argentina 11-0 in 2007. To be fair it is not the first time the USA team has won big, as in 1991 they claimed a 7-0 victory in the World Cup when they took on the Chinese Taipei, but 13-0 is pretty remarkable, there almost don’t seem to be enough minutes of play in a single half to set up and score 10 goals but that is what happened.

Alex Morgan was one of the goal scorers, and she racked up five goals for her country. Speaking after the game, she said “With the scoreline tonight, we have to look at the group stage as every goal counts. It was important for us to continue to go. We knew every goal could matter.” Being the defending champions they are going to have a strong desire to pull a double, and the USA team has lost just one of their international games in almost two years of play since July 2017. There have been some draws, but their current record is seven wins in a row with 36 goals in those matches.

Naturally, Thailand was gutted but their boss, Nuengruethai Sathongwien, has urged her team to fight on. They rank 34th in the world but do still have a chance to make the next stage of the tournament, if they can perform against Sweden and Chile. She also spoke highly of the American players saying “They saw that our players were very disappointed and they wanted to encourage us to continue fighting. Thank you very much for that. We’ve got two more games to play, and we need to bounce back. They have their responsibilities, and they know what they need to do. My players were waiting for this moment, and they were really disappointed.”

America will now face Chile on the 16th of June in Paris, a side who will now be feeling a little nervous at the prospect and on the same day Thailand will have to take on Sweden and get a good result to continue.