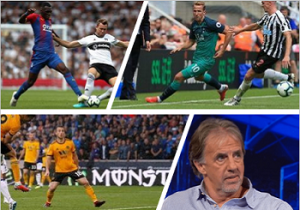 Which Premier League 2018-19 Team Was Most Profitable To Bet On?

Which Was The English Premier League 2018-19 Most Profitable Team To Bet On?

As the English Premier League 2018-19 season came to an end last weekend, we teamed up with the statisticians at Betway to take a look at which team would have won you the best odds on a £10 weekly bet throughout this exhilarating football season.

Although Manchester City were crowned champions last weekend, from a punting point of view they didn’t deliver the best return for those who bet on them every week, well not as good as Crystal Palace in any case during the course of the season.

Manchester City broke many Premier League records last season, however, if you were to punt on them regularly this season, you would have had a return of £28.70 while Crystal Palace would have given you £180.60, this is probably due to Andros Townsend’s thunderbolt strike and contender for goal of the season as Palace beat City 2-3 on 22 December 2018.

It is no surprise the Huddersfield finished last both in league table and in the punting league, and had you placed a bet on them every week you would have made a loss of -£226.30. Fulham was the next worse team to bet on with an overall loss of -£170.50 despite Ryan Babel’s best efforts in trying to keep them alive in the league.

Taking this into account after the Premier League season finished in a flurry as Liverpool sought to end City’s dominance, only to lose by one point, punters will be looking to sharpen their prediction tools for next season’s weekly weekend accumulator.