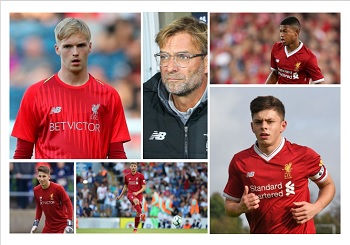 Liverpool is the team to watch this transfer season as five stars get set to move into new positions on the squad. The team, for the most part, has been performing well but Jurgen Klopp has had his eye on a few new stars who will, hopefully, help bolster the team in the positions in which it has been most vulnerable.  Fans, including mobile Intertops Casino Red bettors, have been laying their money on their expectations that Liverpool can look forward to a successful summer season.

Two of the Academy stars that Klopp thinks might be able to add extra depth to his squad include the acquisition of Kamil Grabara or Caoimhin Kelleher.  Either of these two up-and-coming players would replace Simon Mignolet who will likely be leaving Liverpool at the end of the season. Mignolet only played twice in the last year and he’s clearly frustrated.

Liverpool spent £65m on Alisson Becker who has been a sensational shot-stopper for Liverpool. However, Klopp’s reliance on him has left Migolet without much opportunity to get on the field. Migolet has made no secret of his disappointment at his lack of playing time and he wants to have a chance to shine.

If Mignolet does leave, Klopp will have no recognized No 2 or No 3 short stopper. The question is, will Klopp decide to promote Grabara or Kelleher instead of finding an established deputy?  Both Grabara and Kelleher featured in last year’s pre-season but neither have made senior debuts as of yet. Both are highly rated at Melwood.

Until two years ago when Andy Robertson arrived from Hull, left-back was a problem position for Liverpool. Liverpool paid £8m for the Scottish player and he’s been a revelation for the club since then.

Ever since Robertson’s arrival in December 2017, previous first-choice Alberto Moreno has been limited to just eight starts across all competitions.  Moreno’s contract will not be renewed this summer which allows him to leave on a free.

This would promote the highly-regarded Adam Lewis to second choice position to the indefatigable Robertson. Lewis, a  19-year-old Liverpool native, secured  a long-term contract in February thanks to his many admirers at the club.

Lewis has been a Reds fan since his youth. He is a favorite in the under-23s, thanks to  his ability to deliver dangerous passes and crosses into the box. He’s also becoming known for his rampaging runs — actions which have drawn comparisons to Robertson himself.

The Reds have made no secret of the fact that they are on the look-out for a versatile forward who can offer depth across the front three. They aren’t looking for an out-and-out No 9 though, mainly because of Rhian Brewster.

Brewster is expected to take the place of Daniel Sturridge, who is out of contract this summer. Brewster has long been identified as one of the club’s most promising players. Scouts started to pay attention to the 19-year-old when he won the Golden Boot two years ago at the under-17 World Cup.  At that tournament, Brewster scored eight goals for England. Last June he  signed a five-year professional contract after he attracted the interest of Borussia Monchengladbach who took him under his wing.

Jurgen Klopp is now planning to reward the forward’s faith following his 15 months on the injured list with a knee injury. This month, Klopp was effusive in his praise of Brewster. “He is the next really exciting prospect. If you see him training… next season will be his season, his first real season. He is now physically an adult, he grew a lot, he worked a lot and the training session today was, to be honest, pretty impressive.”

Some Reds fans have been crying out for Liverpool to sign a new centre-back after watching Joe Gomez, Joel Matip  and Dejan Lovren  struggle with fitness woes during their spells at Anfield.

Klopp, however, is banking on the one player who is already at the club who can offer some extra defensive back-up. Many observers have expressed their dismay that Nat Phillips  was robbed of his chance to shine last season due to injury problems – his Achilles issue eventually required surgery. That may be set to change now after the 21-year-old Englishman impressed in pre-season. After a win over Torino in August Klopp commented that  “Nat Phillips played an outstanding pre-season and now he played the game tonight, 70-80 minutes at Anfield for the first team. It is really nice to see how he developed.”

Phillips is in training with Liverpool’s first-team now. He hopes to get opportunities in the senior squad this summer when he can prove that he’s ready to be called to the squad.

Many analysts believe that the Reds lack the kind of attacking depth that has given rivals Manchester City the title. This seems to be particularly true  now, when the lack of a natural No. 10 is acutely felt. Both of these voids might be filled by player Harry Wilson. Wilson has been exceptional for Derby County, the team that’s bidding for promotion to the Premier League.

Wilson, a Wales native, is the youngest player to get a cap in his country’s history. He boasts 18 goals and six assists for Frank Lampard’s Derby and has previously served as captain for the  Liverpool under-23s.

Wilson is a self-confessed Liverpool fan so for him, to play for Liverpool would bring extra incentive to shine. Whether he uses his minutes in pre-season for the Merseyside outfit will be dependent on whether he leaves on loan or stays at the club.