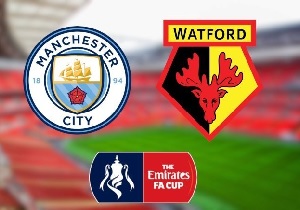 Anyone, whatever their allegiance, who thinks that the multi-million pound squad from the Etihad has only got to turn up on the day to claim the trophy should think again. It`s only six years since Manchester City, in their 10th FA Cup Final, lost to Wigan, in their first, despite being the hottest of favourites. It`s a cert that Pep Guardiola won`t need to remind his players what happened in 2013.

City`s first FA Cup Final, in 1904, was also their first triumph, a 1-0 victory over Bolton Wanderers thanks to a Billy Meredith goal. It was to be another 22 years before they reached the Final again and they faced the same opposition except on that occasion it was Bolton`s legendary striker David Jack who netted the only goal, at Wembley.

In 1933 City faced Everton and were comprehensively beaten, 3-0. They returned 12 months later with teenage sensation goalkeeper Frank Swift in goal. Although Swift`s decision not to wear gloves on a very wet day rebounded on him when he let the ball slip through his hands to give Portsmouth the lead two Fred Tilson goals saw City claim the trophy.

The 1955 FA Cup Final saw City meeting Newcastle United but an early injury to City defender Jimmy Meadows saw him stretchered off leaving the 10 men to contest the remaining 77 minutes of the game. Newcastle won 3-1 to claim their third FA Cup in five years.

A year later it was a City goalkeeper making the headlines in the Final. Bert Trautmann who had been a German POW became a City legend after playing the last 15 minutes with a neck injury that was diagnosed after the game as a broken neck. City ran out 3-1 winners over Birmingham City

In their next Final, 1969, City ran out 1-0 winners against Leicester City with a Neil Young goal but they had to wait another 12 years before a return visit to face Tottenham and their Argentine World Cup winners Ricky Villa and Ossie Ardiles. The first game ended 1-1 before the teams returned a few days later for a replay which Spurs won 3-1.

It was to be another long wait for City`s next Final, 2011, and for opponents Stoke City it was a debut FA Cup Final and it was Yaya Toure who spoiled the Potters day with the only goal of the game. Two years later it was Wigan`s turn to be party poopers as they triumphed 1-0 over a 10 man City team after Pablo Zabaleta became only the third player sent off in an FA Cup Final.

Watford`s only previous FA Cup Final was in 1984 when they faced the team of the moment at that time, Everton. Looking back, like many a cup final, there are usually only one or two moments from each Final that stick in the memory and 1984 is no exception.

Everton went a goal up just before half-time through Graham Sharpe but it was their second goal, just after the restart that knocked the stuffing out of Watford and it was a goal surrounded in controversy which resounds to this day. And like Ray Wood in 1957 and Harry Gregg v Nat Lofthouse a year later it was to be a contentious clash between a goal scorer and a goalkeeper that proved so controversial and decisive.

Andy Gray rose high to attempt a header on Trevor Stevens` cross and got above Steve Sherwood. Unlike most jumpers Andy climbed, without using his arms for elevation, and got a clean connection with the ball which the Watford goalkeeper was just about to claim with both hands. Gray got to the ball first and guided it into the net by virtue of the fact he was more assertive in going for the ball than Sherwood.

The Everton striker wheeled away to the consternation of everyone connected with Watford. John Ward, assistant manager to Graham Taylor, at the time takes up the story.

“All of us on the Watford bench waited for the referee to award a free-kick. He didn`t and that second goal knocked us for six. At 1-0 we were still in it but the second goal was a killer.”

It seems that in the majority of FA Cup Finals involving Manchester City and Watford there is a pivotal role for goalkeepers. So too may be the case in the 2019 Final depending on team selection, especially as far as Watford are concerned. And it may turn out to be THE FA Cup Final story of all time.

Watford`s Number 1 goalkeeper is Ben Foster who has been streets ahead as one of the best custodians in the present Premier League campaign this season but Heurellio Gomes has played in the FA Cup games. In the build up to the Final Foster was asked what he would do if selected ahead of the 38 year old Brazilian, who is to retire after the Final to become a pastor. Foster said.

“I`ll absolutely refuse. Heurelho deserves it and should play without a doubt. He has never let this club down and never will.”

In terms of who will win the FA Cup I think that one decision could be pivotal. City have the better team and better players but in what is a one-off game the difference between Gomes and Foster in terms of goalkeeping ability is a chasm. Foster in goal gives Watford a chance, less so if sentiment is the driving force behind selection.

I base my prediction on that. City to win if Gomes is in goal, Watford an outside chance if Foster does not start.