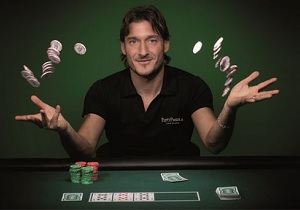 Article: Top 5 Things Footballs do in their Spare Time

Professional footballers have a busy lifestyle, particularly during the season, with the cycle of training and playing games taking up most of their time.

Away from football it can be difficult for players to enjoy their spare time, especially with the scrutiny they are under from fans and the media.

However, there are plenty of ways footballers can enjoy their downtime, both in the comfort of their own home and while they are out and about.

Read on as we look at the top five things footballers do in their spare time.

With players forbidden from betting on football, it is natural that they will find other sports and avenues to fuel their passion for gambling.

Poker has long been the card game of choice amongst footballers, with many top stars taking up the game.

Some players have even gone on to enjoy success on the professional poker circuit, including Teddy Sheringham, Gerard Pique and Tony Cascarino.

Footballers often move around during their careers, meaning many are separated from their family and friends for long periods of time.

Players regularly use their free time to return home, helping to maintain personal relationships with their nearest and dearest.

However, these types of visits can sometimes lead to trouble, something that was highlighted perfectly by Jordan Pickford’s experience when he was on a night out in Sunderland.

The Everton goalkeeper was involved in a scuffle after his partner was verbally abused, showing that players need to be selective about when and where they enjoy a night out.

Golf has long been the pastime of choice for many players, with its relaxing pace proving the perfect antidote to the hustle and bustle of football.

Gareth Bale, Harry Kane and Wayne Rooney are amongst the stars who can be regularly found on the golf course, while the Premier League’s all-time leading goalscorer Alan Shearer is also a talented golfer.

Dalglish has been a keen supporter of La Manga Club in Spain for many years, winning the prestigious Footballers’ Golf Classic there on three occasions.

Some footballers go the extra mile when it comes to their fitness regime, using their spare time to do even more exercise.

Juventus star Cristiano Ronaldo is a perfect example of this, taking his club training to a different level by working out in his own time.

Ronaldo does an abs workout in his bedroom when he wakes up in the morning and again before he goes to bed.

Other players prefer to keep it simple, walking their dog in the countryside or going for a bike ride with their partner.

The competitive nature of footballers means they naturally gravitate towards playing popular games like FIFA or Fortnite.

Barcelona star Lionel Messi is a big fan of the FIFA games, regularly playing against his teammates from club and country.

Top players like Mesut Ozil, Christian Fuchs and Javier Mascherano have taken this passion for gaming a step further by investing in the growing world of eSports.

The Football Manager series is also popular amongst players, with many immersing themselves in the game to hone their managerial skills ahead of a possible move into a new career further down the road.