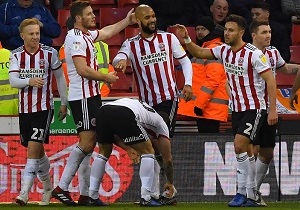 As the 2018/19 season draws to a close, teams across the leagues are either celebrating or commiserating as we draw closer to getting confirmation on the teams that will be promoted and, indeed, those that will be relegated. For Sheffield United the news this weekend could not be better as freetips.com reports.

A draw is better than a loss, but never quite as good as a win. In most cases, it gives the teams one point each, and they move on, but when Leeds United drew against Aston Villa, the knock-on result was more than anyone at Sheffield had dared to hope. This draw meant that next year United will join the Premier League and they could not be more elated. Their manager Chris Wilder spoke to BBC Radio Sheffield after their promotion was confirmed.

With trembling emotion in his voice, he gave his reaction “It’s one of the greatest days of my life, 100%. To see it over the line today, surrounded by my players and my family, to see us back in the Premier League is truly incredible. What a day to be a Blade. Next season will be a fabulous experience for everyone involved.”

Of course, the team were aware they could well be heading on up next seasons as they previously won against Ipswich the day before the Villa-Leeds clash, and the 2-0 victory added three points to their total, but it was not a done deal until the whistle blew at Elland Road. Initially, it looked as though Leeds were going to win as they took the first goal, but the equaliser was all Sheffield needed to secure their place.

Wilder took control of the team after the season ended in 2016, where the team had finished 11th. In his first season, he changed the fate of the team and led them to an impressive table win and 100 points. Sadly in 2017/18 they could not repeat their performance, and although they sat top of the table by the November, it went downhill after that, and they finished in a pretty mediocre 10th place. However, determination seems to have paid off, and this year the 51 local man who had always been a fan of the Blades even before he took the reins has helped the team work their magic once more.

The only thing that could sweeten the news they received this weekend would be lifting the trophy once more, and the team are in a strong position to do so. To take the silverware, they will need to win against Stoke City in their upcoming match and will need Norwich to lose when they meet Aston Villa in their last game. It could be done, but it is by no means a certainty. In the meantime, the team will play next season in the Premier League for the first time since their last appearing in top-flight football in 2007.