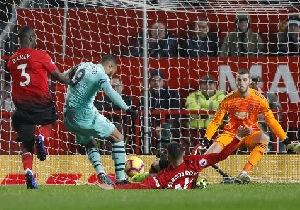 Article: Goals on the Cards as Manchester United visit Arsenal

Manchester United visit Arsenal on Sunday aiming to continue their pursuit of a top four place in the Premier League.

United’s thrilling 3-2 victory over Southampton over the weekend lifted them up to fourth in the table, three points behind Tottenham Hotspur.

The Gunners are now fifth in the standings, one point adrift of United following their 1-1 draw at Wembley against Spurs.

United’s resurgence under temporary manager Ole Gunnar Solskjaer has been remarkable, with the team picking up 32 points out of a possible 36 since the Norwegian replaced Jose Mourinho.

They were 13 points behind Spurs when Solskjaer took over and had been a popular pick in lay betting markets prior to Mourinho’s exit from Old Trafford.

They have since won at least five more Premier League points than any other side and the manner of their performances has been hugely impressive.

United have been hit hard by injuries over the past few weeks, but younger players like Scott McTominay, Andreas Pereira and Diego Dalot have come in and grabbed their opportunities with both hands.

United have already won at the Emirates Stadium this season, recording a 3-1 success in the FA Cup at the end of January.

Goals by Alexis Sanchez, Jesse Lingard and Anthony Martial secured a deserved victory for United who overwhelmed the home side with a ruthless counter-attacking display.

However, Arsenal secured a 2-2 draw when the two sides met in the league earlier in the season and they will fancy their chances of picking up three points on home soil.

The Gunners missed a golden opportunity to close the gap on Spurs on Saturday, with Pierre-Emerick Aubameyang’s poor penalty late in the game costing them the victory.

Despite only drawing the match, Arsenal boss Unai Emery will be encouraged by the fact his side came so close to completing the double over their local rivals this season.

With Sunday’s match the last one Arsenal face against another of the ‘Big Six’ sides this term, Emery may decide to take a defensive approach to the game.

A draw would keep both sides on track to secure a top four spot, but United’s return to a more swashbuckling style under Solskjaer suggests they will be going all out for victory this weekend.

There have been 17 goals in the last five meetings between the two sides, so backing over 3.5 goals in Sunday’s match at odds of 7/4 looks a solid wager.