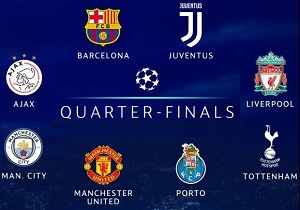 Don`t you just love this wonderful game of ours? Both the UCL and the Europa League Round of 16 games produced some eye-watering football, results and goals. Those ties that produced the quarter-final draw were notable for some of the best team performances in the history of the competition not to mention a few shocks; Ajax eliminating holders Real Madrid, Manchester United making history by becoming the first team ever to come back from a 2-0 1st Leg deficit at home to progress and Tottenham for the superb team performance in Dortmund where a team effort of heroic proportions earned their quarter final berth that should help christen their new White Hart Lane Stadium. Liverpool went to Bayern Munich with a less than impressive away record in the UCL and produced one of their best ever European nights, and they`ve had a few. As for Manchester City, they brushed aside a Schalke side that seemed embarrassed to share the same pitch.

Then over in the Europa League we had La Liga strugglers Valencia breaking Krasnador hearts with last gasp goal to take them through. Sevilla, who have made this competition a virtual monopoly in the last few years were not so fortunate when the five-time winners conceded a 119th minute winner to Slavia Praha to exit 6-5 on aggregate.

Both Manchester United and Spurs had to dig deep. There has never been any question of the quality of players both clubs have but their triumphs were built on good old hard work and determination, basics of the game that seemed defunct in the modern era. United`s success over PSG was especially meritorious because the French side were on the brink of an even greater elevation of their European pedigree to a level where they were regarded as hot favourites for their `Holy Grail`.

It was good old fashioned graft, carried out by teams comprising talented individuals who showed they were able to devote individual craft to the team ethic that was the common theme that earned four English clubs a place in the last eight for the first time since 2008.

Not to be outshone Chelsea and Arsenal earned their Europa League quarter-final for an unprecedented presence of six Premier League sides out of the last 16 left in Europe`s top two club competitions.

Ajax`s reward for blowing away Real Madrid is a tantalising tie with Juventus and former Real icon Cristiano Ronaldo. It is a pairing that throws up similar assessments of the outcome as did the tie with Real. The Dutch club may be considered at a disadvantage playing the first leg at home but after the way they reversed the setback they suffered on home soil to the UCL holders I think it is irrelevant. Juventus may provide a stiffer test to an Ajax side brimming with youth and a complete lack of fear and the Italian outfit are driven by their failure in recent Finals so it looks like a case of immovable object and irresistible force. One stat tit-bit that may have a bearing on the outcome is the fact that Ajax are unbeaten away from home so unless there is a heavy defeat in Amsterdam they would fancy their chances. As I began writing this assessment of the first tie drawn in Nyon I gradually moved away from my initial feeling of a Juve triumph. Now I am not so sure. I think the way Ajax played over the two legs against Real and Dusan Tadic being the most in-form player in Europe with six goals and four assists they might just edge it.

Five time winners against two time winners. I bet the first thought that crossed Jurgen Klopp`s mind was NOT, `we have got the easiest draw imaginable` but more thinking that everyone else would be thinking that. Nor do I think last season`s drubbing of the Portuguese club by Liverpool as they progressed all the way to the Final will have one iota of influence on this quarter-final. However, the fact it was away and all five goals came from their `Terrific Trio` of Salah, Firminho and Mane, WILL impact but in a positive way for Liverpool. One major negative for Porto is that they will have to face Liverpool`s potent striking ability without Brazilian defender Eder Militao who has joined Real Madrid for £42.7 million.

Contrary to a widely held belief that Liverpool will struggle to manage their double assault on the UCL and the Premier League I think the fact that they are neck and neck with Manchester City, domestically, will keep them focused on the old adage, one game at a time.

All that being said Liverpool should be too strong over the two legs and are the team out of these two to savour a semi-final with either Barcelona or Manchester United.

PREDICTION: Liverpool to go through to semi-final

You have to feel for Spurs drawing Premier League opposition but not only that, they will play a City team that seems to play the same way whether it is a PL game or a European one. And with so many quality players in a squad deep with top quality performers in every position they have a massive advantage over Tottenham.

Another advantage I see that City have is their focus on the dream of lifting the UCL trophy. Given a choice between Premier League and the UCL, not forgetting that at the time of writing they are still on course for the quadruple, my money is on the latter being the Etihad preference. I also think that the neck and neck race with Liverpool for the Premier League will help City maintain their focus on Europe`s premier club competition.

But Tottenham do have a chance, any side with Alli, Eriksen and Harry Kane cannot be dismissed even if they are up against City. The only perceived chink in City`s armour is the heart of their defence. Unsettled, at best, unnerved as usual or imperious, most of the time, it may well come down to how a team that scores an average of three goals a game or thereabouts, copes at the back.

In assessing the outcome of this tie I keep seeing the word `RELENTLESS` when I think about City and it is that approach I think will give Pep`s team any further incentive for what would be the preferred semi-final against either Ajax or Juventus.

I think all at Old Trafford, from Ed Woodward down to the tea ladies and all and sundry in between are licking their lips at this one. They already have a siege mentality at the club going way back before Fergie and they will love being not so much underdogs but more under appreciated that they could actually dump Barca.

I think United with their attacking prowess are more looking forward to testing the Barca back line than their own defence is relishing facing Messi and his mates. This could end up being the highest scoring UCL quarter-final of all time, the current record is held by Bayern Munich for their 2-0, 4-0 quarter-final win over Kaiserslautern on the way to the 1999 Final.

Due to UEFA rules this tie is reversed so the first leg will be in Manchester which may have the biggest effect of all the factors surrounding what decides who will face Liverpool or Porto in the last four. Barcelona may not be the TEAM they were but, as with Juventus, one man can make a team, especially if that man is Messi.

Chelsea boss Maurizio Sarri wanted to avoid his former club Napoli until the Final itself and went someway to getting his wish as the Serie A side were drawn to play Chelsea`s London neighbours Arsenal although the tie has been altered from the first leg in Naples because of Uefa rules. Chelsea`s reward for their demolition of Kiev in the last round is a clash with Slavia Praha.

Villarreal versus Valencia ensures yet another Spanish side in the semi-finals of competition that has been dominated by La Liga sides for the last seven years. Benfica take on Eintracht Frankfurt to decide who faces the winners of the Slavia v Chelsea quarter-final.

In very recent times Arsenal have shown a greater resilience than had previously been exhibited since Unai Emery became coach and, ironically, that improvement seems to have coincided with Aaron Ramsey declaring he was Juve bound. The Welshman then proceeded to demonstrate how crucial he is to the Gunners.

After three previous wins in this competition with Sevilla, successive wins, Emery will be hoping Ramsey can be the catalyst for his ego-burdened squad to send Arsenal`s longest serving player on his way with a winners` medal. Sending the team he has served so well, only to be ditched by a manager who doesn`t rate him highly enough to keep him, into next season`s Champions` League will be the best possible answer by the Welshman who will be hoping he does better in Turin than another Welsh icon, Ian Rush.

Napoli got the fright of their lives against Red Bull who came mighty close to a famous win after they recovered from conceding an early goal at home that gave Napoli a 4-0 aggregate lead. Salzburg eventually won 3-1on the night but it wasn`t enough. But it was enough to give Arsenal encouragement that they can eliminate the Serie A side.

PREDICTION: Arsenal to go through

Villarreal continue to baffle observers with their exploits in Europe whilst struggling in 17th place in La Liga and a very realistic chance of relegation. They completed a double over Zenit to earn an all Spanish tie with the very fortunate Valencia who needed a last gasp goal to triumph over Krasnador.

The only real interest in this tie, outside Spain, will be from Italy and England who will provide the opposition to whichever La Liga side prevails, in Napoli and Arsenal, respectively.

I take Valencia to win because of their league form, only Barcelona and Atletico Madrid, have lost fewer league games than Valencia`s four.

PREDICTION: Valencia for the last four

Eintracht reached their first European quarter final since 1994-95 with a close, tightly run 1-0 aggregate victory over Inter Milan. Ironically the only goal of the tie that sent the Bundesliga team through to face Benfica came from Serbian Luka Jovic who is on loan in Germany, from Benfica!

Benfica earned their last eight berth with an impressive win over Dinamo Zagreb. After losing away, 1-0, the Eagles of Lisbon relived some of the club`s glory days with a 3-0 success at the Stadium of Light.

Benfica have a long and illustrious pedigree in Europe and should have too much for Frankfurt but a close race with Porto for the Portuguese league title may distract them.

The Czech side went toe-to-toe with one of the best teams in Europe, Sevilla, in the last round and knocked them out so they won`t be too daunted by Chelsea, but they should be. Maurizio Sarri`s side demolished Kiev, away, and the reborn Olivier Giroud reminded anyone who needed reminding, he is not yet a spent force.

However, the major problem for Chelsea is which Chelsea side will turn up on the two nights. If they get a good enough result in Prague then the second leg should be a formality.

It remains to be seen if Sarri can maintain dressing-room harmony or even if the players themselves can ditch the in-fighting, long enough to get one step closer to Champions` League football next season, plus a trophy, if they don`t make it via Premier League finishing position.

There isn`t too much standing between Chelsea and a place in the Europa League Final, expect perhaps Chelsea themselves.

PREDICTION: Chelsea to go through 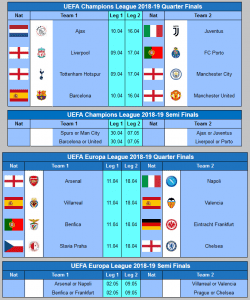