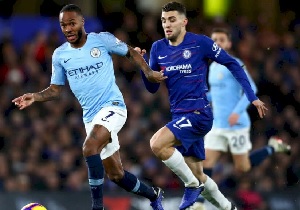 Manchester City host Chelsea on Sunday aiming to keep up the pressure on Liverpool at the top of the Premier League.

City bounced back from their shock defeat at Newcastle United with a top class performance against Arsenal over the weekend and they remain firmly in the title mix.

Pep Guardiola’s side face a midweek trip to Everton before welcoming Chelsea to the Etihad Stadium and they will be confident of picking up six points from the two games.

They can be backed at 1/2 to win Sunday’s match and any new punters planning to wager on the outcome can have betting odds explained here.

City were beaten 2-0 at Stamford Bridge earlier in the season and Pep Guardiola’s side will be eager to gain their revenge this weekend.

They have won 12 out of 13 matches at the Etihad Stadium this term, smashing 43 goals in the process. City were hugely impressive against Arsenal, with Sergio Aguero’s hat-trick sealing a fully-deserved 3-1 victory.

Chelsea have lost their last two away matches without scoring a goal and they were particularly poor in their recent 4-0 defeat at Bournemouth. However, they bounced back to form with a 5-0 home success against Huddersfield Town to maintain their challenge for a top four finish.

City were punished for their lack of cutting edge in the reverse fixture as they lost for just the third time in their last nine league meetings with Chelsea.

The defending champions paid for a lack of ruthlessness after dominating the first-half, with N’Golo Kante firing the home side ahead just before the break.

Chelsea gained confidence after half-time, securing the win with 12 minutes left when David Luiz’s glancing header following a corner bounced in off the far post.

City missed both Aguero and Kevin de Bruyne that day, but the pair will be fit and firing this weekend and will undoubtedly make life difficult for the Blues.

With games in the FA Cup, Champions League and Carabao Cup to follow during February, it is imperative that City keep their title bid on track with two victories this week.

Three subsequent fixtures against West Ham United (H), Bournemouth (A) and Watford (A) all look winnable, potentially setting City up nicely for their visit to Manchester United on March 16. Liverpool face some tricky-looking fixtures in the Premier League over the next few weeks, particularly their away games against Man Utd and Everton.

City’s experience of winning trophies over the past few seasons should stand them in good stead during the run-in and they still look a good bet to overhaul Jurgen Klopp’s side.