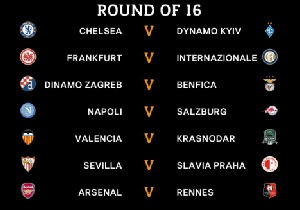 The UEFA Europa League Round of Sixteen draw kept Arsenal and Chelsea apart as the London rivals seek back-door entry into next season`s Champions` League although Sarri`s team, for now, can probably be more optimistic reaching that particular hallowed land via a top four Premier League finish than Arsenal. The draw contains a very high number of quality sides who can rightly be adjudged favourites to lift the trophy.

At the time of the draw Chelsea have a tougher task against Kiev who were neck and neck in second place in the Ukranian Premier League, just adrift of Shakhtar Donetsk while, on paper, Arsenal may be perceived as having a lesser obstacle in Rennes. That is until consideration is given to the way the Ligue I side pulled off a sensational comeback to eliminate Real Betis. After a crazy 3-3 draw in the home leg the French side went to Spain and won 3-1 for a 6-4 aggregate victory. With a couple of weeks to go before the first legs take place Chelsea could already have a trophy, or a new manager, or both.

Napoli were comfortable conquerors of FC Zurich, to earn their tie with Red Bull Saltzburg while Inter won 5-0 over the two legs to dispatch Rapid Vienna. Inter face Eintracht Franfurt who thrashed Shakhtar Donetsk 4-1 in the 2nd leg after a 2-2 draw but are struggling in mid-table in the Bundesliga.

Red Bull lost 2-1 in Brugge but turned on the goal rush at home, in the 2nd leg, with a 4-0 win to progress. The Italian masters of the art of defending will be wary of the goal threat they face especially Napoli who will also see that Red Bull had conceded just 16 goals in 18 league games, the sixth best in the top four European domestic leagues.

Valencia have been struggling in La Liga, mid-table by the time they qualified for the last 16 of the Europa League, but they have saved their best form for Europe. They should have too much for Krasnador who only reached this next stage courtesy of the away goal they managed at Bayer Leverkusen after the goalless draw at home. But the Russian club are second in the Russian Premier League so will provide tough opposition.

At the other end of the scale serial Europa League winners Sevilla followed up their 1-0 win in Rome with a 2-0 home victory to progress at the expense of Lazio. Sevilla continue to impress as the best of the rest chasing the `Big 3` in Spain and unless Real do something special in the next couple of transfer windows they might well break the stranglehold of the usual suspects when it comes to UCL qualification. Slavia Praha will provide a decent test for Sevilla as they bounced back from a disappointing goalless home draw to thrash Belgian League leaders Genk 4-1 on their own pitch.

Villarreal complete the triple Spanish presence in the Europa League and are surprising all and sundry at their exploits in Europe as they fight against relegation at home because they qualified for the Round of 16 as they sat uncomfortably in the last of the three relegation places, a point from safety. Zenit St Petersburg, who lead the Russian Premier League, may be a bridge too far for the Spanish outfit who will soon be able to, as the cliché goes, `concentrate on the league`.

Dinamo Zagreb qualified for the last 16, whilst enjoying a fairly comfortable 14 point lead at the head of the Croatian First Football League, thanks to a 3-0 2nd leg win that wiped out their 2-1 defeat in Pizen. The result showed not only the quality of the team second in the Czech First League but that of the Croatian club. Benfica are, as usual vying with Porto at the head of the Primeira Liga table and are averaging just under three goals a game so Zagreb have their work cut out but I think the Croatian side may just edge this one.