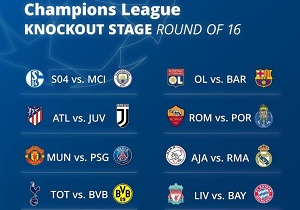 Article: 2019 UEFA Champions League Round of 16

Premier League clubs make up 25% of the last 16 of the UEFA Champions League offering the real prospect of an all English Final.

Paris St Germain set a new group stage record by scoring 17 goals and have their sights firmly set on winning the UCL this season.

Although the English clubs were kept apart in the last 16 when the competition reaches the next stage, the quarter-finals, it is possible we will see all-English quarter finals when domestic clubs will get the chance to demonstrate the other side of European football, Knock-Out football.

And that knock-out stage of of the UCL has thrown up some crackers including tie of the round Atletico Madrid against favourites Juventus. Manchester City have been given the early Christmas present of the most favourable draw for an English club, Schalke 04. Things may change before the two clubs clash but the current form for each suggests City will prevail as they are firing on all cylinders whilst Schalke have lost eight of their 15 league games and are struggling in the bottom half of the Bundesliga.

Even taking into consideration the rule change that allows players signed in the January transfer window to play for another team in the UCL campaign City are well blessed with their current squad and whatever permutation Pep Guardiola fields, home or away, they have the quality in depth to rightly be considered second favourites behind Juventus.

PREDICTION: Manchester City to go through

The mouth-watering tie of the round between teams that are so well matched. Both endowed with world class defenders and world class strikers. Both are mean when it comes to defence though, conversely, neither are rampant scoring sides. In a tie like this, where there is so little to favour one side over the other it may be something special, a flash of genius that decides who progresses to the next round.

Each team has one of the kind of players I refer to; Cristiano Ronaldo and Antoine Griezmann.

Ronaldo seems to have been reborn at Juve after, relatively speaking, going stale at Real and recently he scored Juventus` 5,000th Serie A goal in the 1-0 victory over Torino. He may be 33 but is still the kind of game changer that could be the difference.

On the other hand Atletico are growing in stature, both domestically and on the European stage. Griezmann pocketed a World Cup winners` medal in the summer and would dearly love to add the UCL to his trophy collection after committing his future to the Estadio Metropolitano. He has become a more rounded, mature player in the last 12 months but Ronaldo is already the finished article.

Tough one to call but I favour Juventus.

Manchester United only qualified via their UEFA Europa League success, PSG have ploughed on relentlessly and, like Atletico Madrid, they have matured immensely on the European stage over the last two seasons. Being pre-eminent domestically has allowed PSG to grow as a force in Europe and almost, rest their star-studded squad or at least rotate, to allow their stellar players to bring their `A` game when it comes to UCL action.

I doubt even an on-form, on-the-night performance will give United a sufficient buffer from the first leg to stave off what will be a tidal assault in Paris.

PREDICTION: I cannot see United stopping PSG as they seek their `Holy Grail`.

What an intriguing tie this is. An evolving Spurs side against the heir apparent to Bayern Munich`s dominance in the Bundesliga.

Dortmund go into the Christmas period unbeaten and nine points clear of Bayern while Spurs are slowly but surely growing into their European ambitions.

Spurs proved by going to Barcelona and getting the result they needed to reach the last 16 that they have learnt from past European endeavours, and failures.

This tie also gives English fans to see Jadon Sancho in action against Premier League opposition for the first time in competitive action and Dortmund have improved immensely as a football force since Jurgen Klopp left for Liverpool.

This will be a tough test for Tottenham and one they could pass.

With that as a caveat I think Dortmund will be just a little bit too good for the Premier League side.

Pep Guardiola described Lyon as `one of the toughest opponents I have ever faced` and the French side will provide a similar test for Messi and co. Lyon, along with Lille, trail leaders PSG, doesn`t every French club, but are well set to qualify for next years UCL campaign whatever happens on the domestic front.

Barcelona are being pushed all the way by Seville and Atletico Madrid in La Liga but are a different animal when it comes to the UCL.

Messi`s star shines unrivaled now, in the absence of Ronaldo, but never one to sit on his laurels and probably feeling shunned after only finishing fifth in the Ballon d`Or the mercurial Argentine he still has a goal every 82 minutes to his name.

Lyon may well beat Barca, in the first leg, but over the two games I think Messi and his mates will score more goals and go through.

PREDICTION: Barcelona to go through

Roma are struggling in Serie A and although they are floating around sixth place as Christmas draws near they are 22 points behind leaders Juventus. Even putting into perspective Juve`s dominance Roma still trail second-placed Napoli by 14 points. Porto on the other hand lead the Portuguese league and in 13 league games have only conceded eight goals.

Roma do seem to reserve their best form for European games and in Edin Dzeko they have a striker who was the first to score 50 goals in THREE of the Big Five European leagues. Always a player for the big stage the Bosnian is one of the main reasons I believe Roma will reach the quarter-finals and, who knows, remind Manchester City what they let go.

But that was then and this is now although Real are holders of the UCL trophy.

Ajax have, like Dutch football in general, gone through lean times in recent years but, like the national side, there has been improvement as Ajax are pushing PSV all the way for the Eredivisie title and still made the UCL knock-out stage for the first time since 2006.

Real have struggled in La Liga and before the half way stage of their domestic league they had already lost five games.

There is little doubt that this is a transitional period for all at Real Madrid but, like their arch-rivals Barcelona, they are a different animal when it comes to a trophy they regard as their own, private property.

I expect Real to beat Ajax to a place in the last eight but they may have to come back from defeat in Amsterdam to do it.

Munich may be struggling to return to the pre-eminence they once enjoyed in the Bundesliga and may well be some way short of an amazing pedigree on the European stage but they have reached at least the semi-finals in seven of the past nine seasons. An incredible record but they face a Liverpool team that is on the verge of a new, glittering era. The German champions have struggled under Niko Kovac this season but they swept through their qualifying group unbeaten.

Liverpool lost 3-1 to Real Madrid in last season`s UCL Final but they are a different club with a different, more steely resolve, than they had 12 months ago.

It`s amazing what a goalkeeper, Allison, and a centre half, van Dijk, can add to a strike trio; Salah, Mane and Firminho, to revitalise a team.

I expect Liverpool to beat Bayern over the two legs and get one step closer to going one step further than last season.